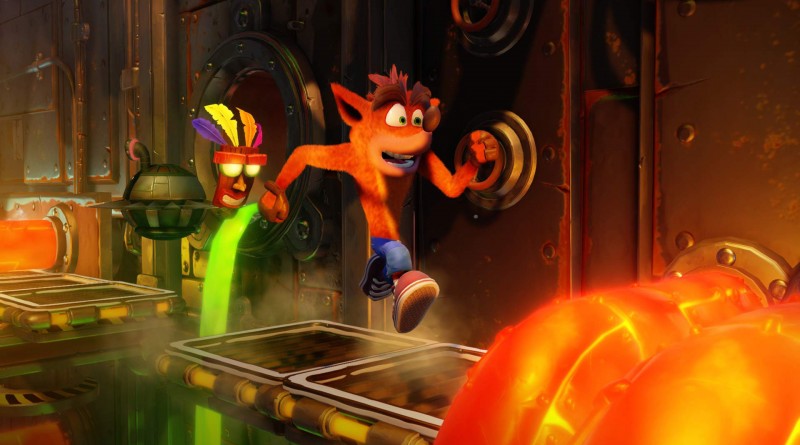 Everyone’s favorite orange marsupial, Crash Bandicoot, returns to take gamers back in time for the latest remaster, “Crash Bandicoot: N’Sane Trilogy” for the Playstation 4. Originally developed by Naughty Dog, Vicarious Visions and Activision handle the remaster, recreating the first game and its sequels “Cortex Strikes Back” and “Warped.” After “Crash: Mind Over Mutant,” the series has taken a huge decline and disappeared from the limelight. Although Crash made an appearance in “Skylanders,” gamers were excited for the return of the first three games that put the orange marsupial on the map and this is more than just a remaster.

In the first game, Dr. Neo Cortex and Nitrus Brio use the “Evolvo-Ray” to experiment on Crash to make him a leader of a militarized army of superhuman animals. When the experiment backfires, Crash escapes and Cortex plans to experiment on another bandicoot named Tawna, a friend of Crash’s who grown attached to each other during captivity. Crash must make his way toward different parts of Wumpa Island, take out various henchmen of Dr. Cortex and rescue Tawna.

In “Cortex Strikes Back,” Dr. Cortex plans to gather 25 power crystals to create a device known as the “Cortex Vortex” with the aid of Dr. N. Gin to enslave the Earth. But to get the crystals to get this device running, Cortex manipulates Crash into gathering the crystals, persuading him that he is helping Cortex to help for the greater good. He sends Crash into a warp room with five floors to gather the crystals, but can Crash see through Cortex’s hidden agenda?

In the final game in this collection, “Warped,” Aku Aku’s evil twin brother, Uka Uka, has been freed due to Doctor Cortex’s space station crashing into the temple where he was held prisoner. Enraged that Cortex has failed twice, Uka Uka recruits Dr. Nefarious Tropy to ensure that Cortex does not fail again. Tropy has created the Time-Twisting Machine, which can allow anyone to travel through time to find gems and power crystals. Crash and his sister Coco, alongside Aku Aku, must put a stop to Cortex and Uka Uka’s plan in this time-traveling adventure.

The gameplay is exactly as it was back in the late ’90s, as Vicarious Visions has taken great care with this remaster, making this as close the original as possible. Youy main form of attack is a spin attack and jumping on certain enemy’s backs creates advantages for jumping high (mostly turtles). Aku Aku also aids you in the adventure as he can help you take an extra hit for an enemy and if you collect him three times you turn invisible and take out any enemy for about 30 seconds. There are also bonus levels that you can collect lives and wumpa fruit and if you collect 100 fruit, you gain an extra life.

The graphics are stunning as more detail is added to the textures of the water, the fur on Crash, and character animation making their expressions more lifelike. The game is also very hard at times and makes games like “Dark Souls” seem like a cake walk when it comes to its difficulty. But when you complete a difficult level in the game, you will be guaranteed to be doing Crash’s victory dance.

“Crash Bandicoot: N’Sane Trilogy” is more than a remaster of three original games. It is a reminder of why gamers fell in love with Crash and made him an icon back in the era of the original Playstation. This game should not be passed up; it is definitely worth every penny and worth going back to replay each level to get all the gems.