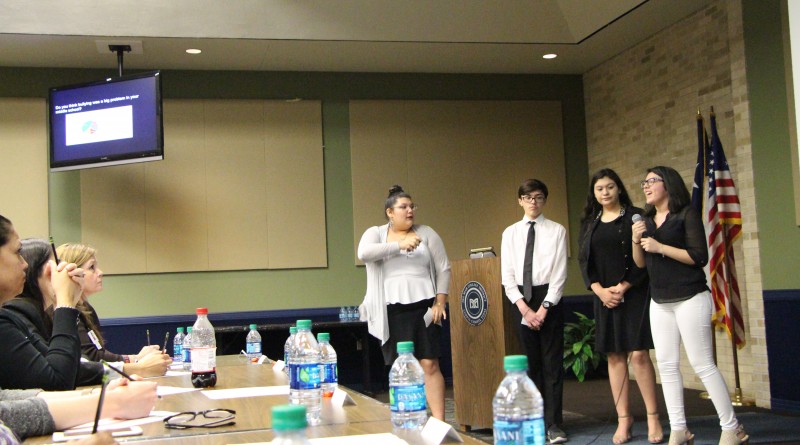 Alanna Flores stood in front of dozens of her classmates and tearfully told the story of her best friend, who committed suicide at 8 years old.

Her best friend was thrown into a restroom stall by two girls who took off her glasses and flushed them down the toilet. They verbally abused her, telling her she should have never been born, Flores said at the Collegiate High School civic fair, Speak Up, Speak Out.

“Later that day she told me goodbye and gave me the biggest hug and said she would see me later,” Flores said while fighting to contain her emotions. “What I didn’t know was that this was the last goodbye I’d get from her.

“She went home and went into her parent’s medicine cabinet, grabbed a bottle of pain medication and took the bottle to her bathroom and took two handfuls of them,” Flores said.

Flores was one of several freshmen at the Nov. 14 civic fair who provided students with their knowledge and research oo topics important to them.

Flores and her group members want to prevent bullying from further happening. They surveyed 152 Collegiate students, finding that 59.1 percent were bullied before high school.

The fair encouraged students to come up with solutions and speak out. The students presenting bullying in middle schools plan to provide Atkins Middle School with a support group twice every month, beginning in two weeks.

The freshmen civic groups demonstrated topics such as stress, teen depression, texting and driving, high debt of college students, the impact of social media on depression, the importance of recycling, the low reading levels of middle school students, and the use of synthetic marijuana in Corpus Christi.

Another group, Royal Health, stressed the importance of access to feminine hygiene products.

“It’s unfair for women to go throughout the day stressing about a natural occurrence. There needs to be better access for these products,” said freshmen Daniel Tellez.

Six judges evaluated and supported freshmen on their presentations.

“It can be very difficult to solve these issues. Students became aware of these issues, however, and felt like they had a voice and that’s the whole purpose behind this particular program,” Wisner said. “I encourage everyone, including the next generation, to treat this as an experience to impact the future for something better.”