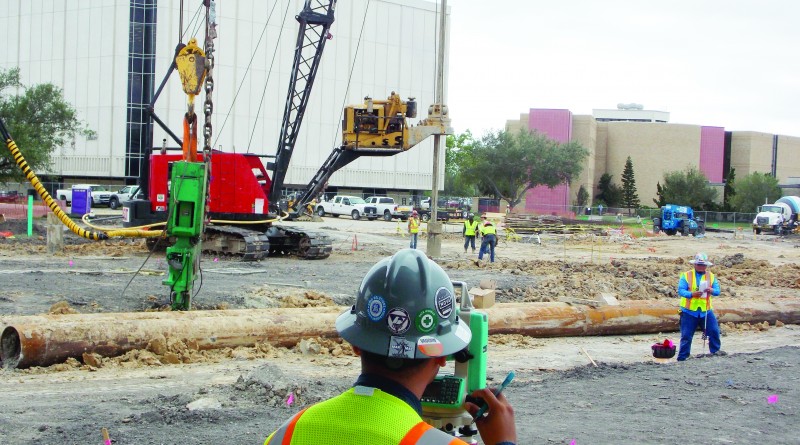 Workers prepare the foundation of the new General Academic and Music Phase II project on East Campus. The project is one of many planned for East and West campuses.

With the General Academic and Music Building Phase 2 project well underway, English Professor Veronica Pantoja remembers her time in the old English building before it was demolished this summer.

“I was a student worker in 1989 and I came back in 2009 and that building had a lot of memories to me,” she said. Pantoja viewed the English building as her home after spending most of her time there. Despite all this, she is excited to see the progress of the new building and how the final product will turn out.

Construction of the new building is on its first phase and the process is going smooth despite some unexpected delays.

Issues with the electrical infrastructure were traced back to where the English building used to be, causing them to reroute part of the infrastructure. Armbruster also said Hurricane Harvey delayed the construction process and the campus also suffered minor tree and fence damage, but the equipment on site fortunately didn’t suffer any damage.

Electrical engineering major Aaron Vega sees the bright side of the construction despite the frustration.

“It is irritating when you have to walk in a big circle,” Vega said. “But I do find it good though because the construction is going to make the school bigger.”

Vega also said it will give better resources to students, more classrooms as well as giving them more programs to major in. Vega also takes advantage of planning ahead while the construction is taking place.

“I plan out my schedule such as how long it will take me, which side is shorter to take in order to walk from building to another building,” he said. This includes walking from the Harvin Center and getting through the Venters Building by cutting through the Music and Fine Arts Building.

Armbruster said the new building will be finished in February 2019 and workers already have begun preparing to place slabs for first building.

“Two slabs on grade will be poured in two to three weeks for the first floor slab, and from there we’re going to go up from there,” Armbruster said.

Once the construction is done on the buildings, they will add walkways for the new building area as well as some landscaping touch-ups.

According to Robert Duffie, director of physical facilities at Del Mar College, other projects listed in the 2014 bond include renovations for the Harvin Center and White Library consisting of IT upgrades and re-roofing existing buildings.

“There are also plans to demolish the Heritage Hall in the near future to be used for parking as well as creating a new entry on Louisiana Parkway to prevent bottlenecking with cars,” Duffie said.

Click here for updates and other details on the project.