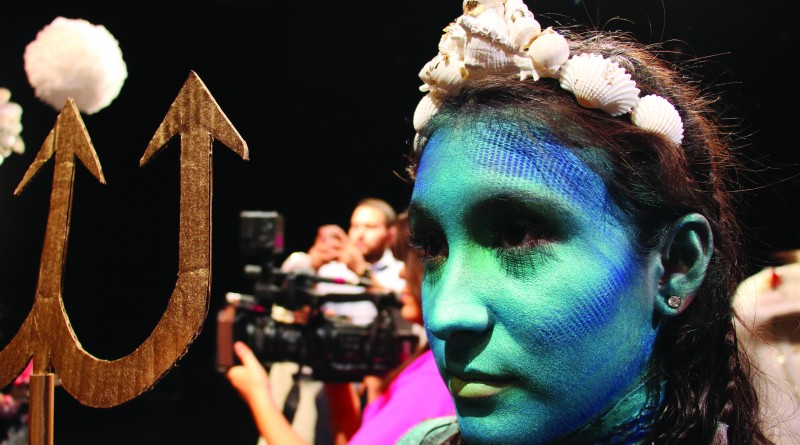 Caitlynn Mitchell arrived at the Fine Arts Building three hours early to start applying her makeup for the 2 p.m. show.

“I started working on my character right after Halloween. My fiancé upset me so I decided to make my character eat him,” Mitchell said.

The class was tasked with not only creating a unique makeup design but also creating a full character with back-story and costume, said Shara Haghjoo, associate professor of drama.

The class got off to a rocky start after Hurricane Harvey put everyone almost a month behind schedule.

“This class was able to complete all the assignments and everyone is on time. We didn’t cut anything out of the core syllabus,” Haghjoo said.

Haghjoo said there are about seven application techniques that must be learned before the students can complete the final project. One of those techniques is using the airbrush.

“We are now equipped with a full airbrush studio, that’s really important. It’s the standard now because of HD and 4K,” Haghjoo said.

Danielle Garza knew exactly what her character would look like when the assignment was first discussed.

“I already knew, I sat down and drew it out,” she said. “I was going for a mixture of elegance and sci-fi horror.

Garza said her “scales” were premade out of a mixture of glycerin, gelatin and water.

“I made the prosthetics over a period of three days. I made all the scales individually then put them all together,” Garza said.

Garza said she spent about an hour applying her prosthetic pieces before the show.

“The more you make beforehand the more time you save the day of,” Garza said.

Garza and Mitchell, along with several other students, had prosthetics applied directly to their eyebrows.

“The real fun starts when they get home and try to take those off without ‘waxing’ their eyebrows off,” Haghjoo said.

Mitchell explained there was a careful process that she and Garza would go through together, helping to ensure they’d both still be sporting brows.

“We have this stuff called Bond Off. Basically you shove a Q-tip under there and let it sit. Your partner has to make sure it’s ready to come so you don’t wax yourself accidently,” Mitchell said.

Eyebrows or not, Haghjoo says she’s thrilled with the final products, especially after the tumultuous start.