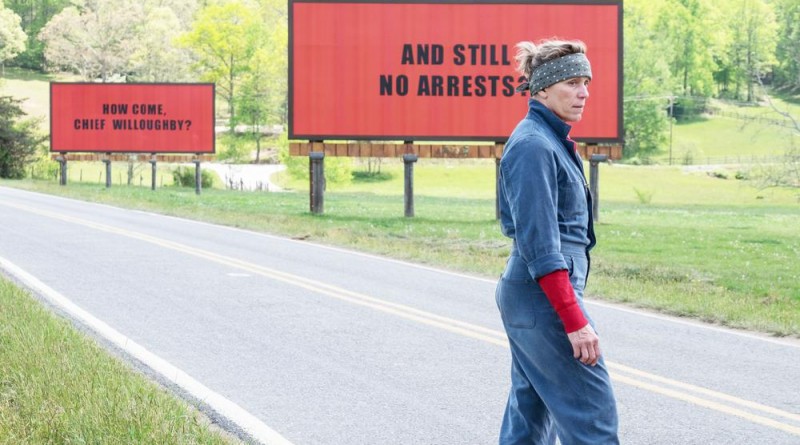 There are restless hearts and trouble waiting to be realized down in Ebbing, Missouri.

“Three Billboards Outside Ebbing Missouri” is a good ol’ Southern story about Mildred Hayes, played by Frances McDormand, a divorced mother who challenges the police to find her daughter’s killer months after the investigation has gone wrong.

Mildred paints three signs with a controversial message to get the cops’ attention with the intention to bring down the Ebbing Police Department.

The police in this fictional town are too inept to solve the murder and the killer is still on the loose.

Bill Willoughby, the respected chief of police, played by Woody Harrelson, was at the head of this investigation. After some months the police just let the case go.

Willoughby has a family of his own and to complicate matters he has cancer.

Willoughby’s second in command, Officer Dixon, played by Sam Rockwell, is the Barney Fife of the film.

The film commentates on racism in the South and an implicit need for criminal justice reform.

Dixon had been allegedly accused in the past of police brutality against young black men.

The explanation that Mildred gives the TV reporter is that her daughter Angela was raped while dying.

At one point in the film Willoughby tells Mildred — hell if you got rid of every cop in this department with racist leanings you’d only have three left and what about the gays?

Mildred’s caper against the police is half successful because she got the town talking about those billboards and her daughter’s murder again.

The investigation leads Willoughby and Mildred and the other characters down a dark path with dire consequences.

Mildred takes the law into her own hands.

There is staggering situational irony in the film.

In a flashback involving Angela and Mildred, they have a loud argument about her going out the night she was killed and before Angela storms out of the door she screams at Mildred, “I hope I get raped,” and Mildred replies back, “I hope you get raped too.”

Director Martin McDonaugh knew what kind of film he wanted to make and he stayed true to that vision.

Frances McDormand and Woody Harrelson deliver a gripping performance in their respective roles.

Peter Dinklage has a side role in the film that is quite humorous.

Rockwell as Officer Dixon plays a racist cop quite well.

“Three Billboards” had a strong sense of setting and the profanity in the dialogue actually moves the film forward.

This is a dark comedy drama that poses those tough moral questions about crime and punishment we face in our lives.

I rarely get emotional in a film and this was a major exception.

This is easily in the top five best films of the year and is a must-see.

“Three Billboards” delivers a teachable moment here, that the path onward to justice is never an easy one. It is a dark film that will rip at your mind and leave you questioning a piece of your humanity.