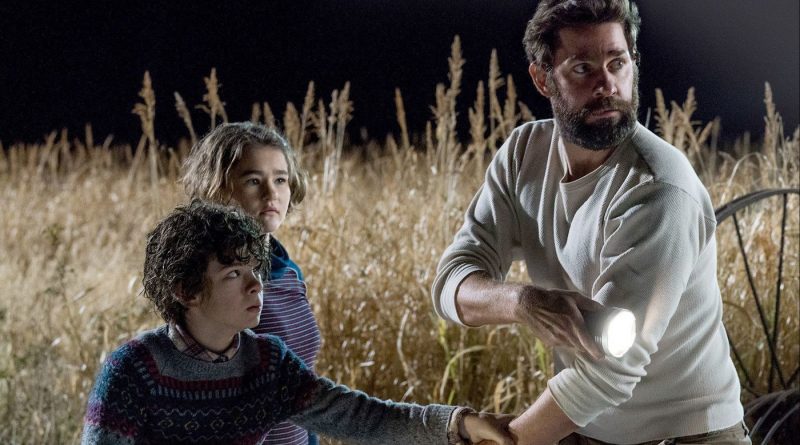 Also starring Emily Blunt, the film’s draft was written by Bryan Woods and Scott Beck in 2013, but was picked up by Paramount Studios in 2017 with Krasinski brought on board as director and writer. The film promised to be one of the scariest films ever made because the film has little to no dialogue, offering more tension. The gimmick manages to work; however, there are some major issues that drag the film down.

In the year 2021, most of the human population has been wiped out by mysterious blind creatures that use sound to attack their prey. The Abbott family are survivors living off their farm and communicating with one another through sign language. The entire film centers on the family trying to survive while trying to avoid these deadly creatures of unknown origin.

The strongest part is the cast as Krasinski and Blunt play a convincing husband and wife on-screen as they do in real life. Because most of the film centers around them making little sound, they have to act with their emotions and Krasinski pulls this off with flying colors with his direction. The one standout of the film is child actress Millicent Simmonds, who portrays Krasinski and Blunt’s deaf daughter in the film. Simmonds, who is really deaf, acts mostly with her facial expressions and sign language, making you feel what her character is going through in the film.

The premise is smart, relying on the film being “quiet,” which Krasinski should be commended for, but the main issue is with certain parts of the story including the creatures themselves. The first half draws you in with its suspense and the creatures being able to catch you with the loudest of noises, but by the second half is when it goes downhill.

When it’s revealed what the creatures’ weakness is, it immediately sucks out all the tension. It also ruins what the film sets up in the first half, making audiences wonder when they’re going to exploit that weakness and defeat these things. The creatures’ origin is easy to figure out as it’s hinted at through newspaper clippings, but it lacks originality on what they are exactly and here’s a hint … they aren’t mutants.

In the end, “A Quiet Place” is a smart concept with a strong cast that falls short with the second half ruining everything, making this an overhyped movie.