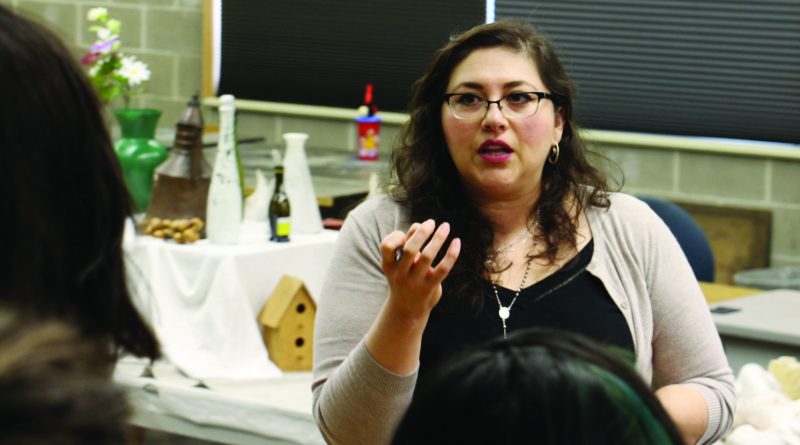 Del Mar College art professor Amorette Garza never thought she would be able to express her Mexican-American heritage on such a national level. The sculpture artist is now a part of what is otherwise known as the largest private Chicano art collection in the United States, amassed by beloved actor and comedian Cheech Marin.

Cheech approached Garza earlier this year about purchasing two of her artworks, following a recommendation by the Art Museum of South Texas.

“It’s extremely validating to be a part of this prestigious collection,” Garza said. “Cheech is very observant and thoughtful about what he’s into, so when he said he wanted my work it was so exciting.”

The “Cheech and Chong” actor has collected over 700 Chicano-inspired works over the past 30 years and has been recognized as one of the top 200 art collectors worldwide.

According to Garza, Cheech had been looking for more female representation within his art collection and immediately gravitated toward what Garza refers to as “Tchotchkes,” the Yiddish word for trinkets, which are heavily influenced by the Día de los Muertos skeletal design.

The first sculpture, titled “Mexican Budai,” is a figurine of the laughing Buddha painted to have a skeletal appearance with the Catholic Sacred Heart in the middle of its chest. The second sculpture, “Tchotchke: Baby with a Heart,” is a ceramic baby doll with the same skeletal design and heart.

“I find found objects and then manipulate them,” Garza said. “I like the idea of taking something that already exists, such as something that someone got rid of, and giving it a new life.”

Garza delved into this concept after seeing several stereotypical images and objects from different cultures sold in stores that she took as offensive. She would take the objects home and change them into skeletons as to not see their original appearance, or as she would say “tchotchke them up.”

The point, according to Garza, is to show that we all have skeletons underneath our skin, signifying that we are all the same. She hopes her sculptures help in getting past the several stereotypical images, which in some cases, can even be racist.

“I really enjoy her work and find it very interesting,” said studio art major Andrea Labrador. “The use of found objects and creating artwork from that rather than starting completely from scratch is something I would have never thought of.”

Although Garza says her art isn’t completely Mexican, she says her sculptures are a good representation of what Texas is — an immense melting pot of cultures from far and wide.

Cheech held an exhibit at the Art Museum of South Texas from January to April, “Los Tejanos: Chicano Art from the Collection of Cheech Marin,” featuring 39 works from 14 artists. The collection was said to depict the Chicano movement’s contribution to the art world.

According to CBS News, Cheech is expected to open his own Mexican-American Art Museum in Riverside, California, the very first of its kind, allowing his vast collection to have a permanent home.