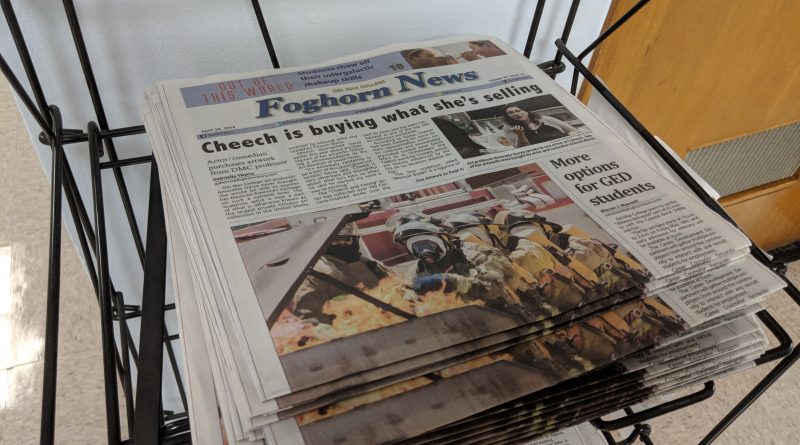 Many offended by piece, others support its publication

A sex column in Monday’s issue of the Foghorn News has led to much controversy on campus.

While some at Del Mar College found the column a light-hearted attempt at satire, others believe the package had no place in an educational setting.

The column, titled “Finals aren’t the only thing going down,” was accompanied by a series of illustrations depicting sex acts between both same-sex and heterosexual couples that some readers took offense to. Even college President Mark Escamilla addressed the issue.

“In the Del Mar College student newspaper, an editorial was published that contained material that may be offensive to readers. The material was published without the knowledge of the college administration, and it was solely the creation and action of the student newspaper staff. Del Mar College, while supporting the rights of a free press, also holds itself to an ethical standard that was not met by these students,” Escamilla stated in an email to all staff and faculty.

The Foghorn is independent from the college and, as with all college newspapers, is not subject to prior restraint by the administration.

Several professors used a group faculty and staff email string to express their disgust and question whether the author, Editor-in-Chief Mark Young, should be charged with distributing pornographic material to minors because Collegiate High School is housed at Del Mar.

“It is a shame that this student did not take into consideration the distribution of this pornography to underage students,” replied Melissa Stuive with the department of public safety education. “Providing access to children unter 18 is illegal.”

The Foghorn editors do not deliver the newspaper to the second floor of the St. Clair building, where Collegiate is located, but those students often take classes in other buildings that did receive the newspaper.

Paul McCann from the English and philosophy department supported the publication of the material and called the idea of prosecuting Young an “outlandish response.”

“Surely you are aware that there are materials in our library that could easily be deemed far more pornographic than any cartoon published in the Foghorn. Not to mention that we have computers in the library that have access to the internet where the most vile pornographic images are a mere few keystrokes away,” McCann stated.

“Is it pornographic? Not by any legal definition of the term. It doesn’t violate community standards of decency in Corpus Christi by a shot!” McCann added.

History professor Dawson Barrett stated he does not believe dual credit students should be treated “as if they are children to be shielded.”

“Dual credit students are college students,” Barrett said via email. “We owe them the respect of allowing them to speak for themselves.”

Doug Harley, from the math department, said he was offended for religious reasons.

“This article is extremely offensive to my God and to my Catholic religion. I recommend that all copies of this edition be immediately destroyed,” Harley stated in an email.

Students on campus, most of whom had seen of the article, had differing opinions on whether it was appropriate for a college setting.

“Journalism and digital media, whether or not it’s too radical, is up to the public,” said Kodie Kapaun, a 19-year-old digital media major. “This column shows a great way to get to know your partner.”

Rosa Soto, 49-year-old liberal arts major, disapproved of the column. She said that while it is explicit, the idea of taking legal action against the author seemed drastic.

“Creo que hay otros maneras de hacer lo (I think there were other ways to do it),” she said.