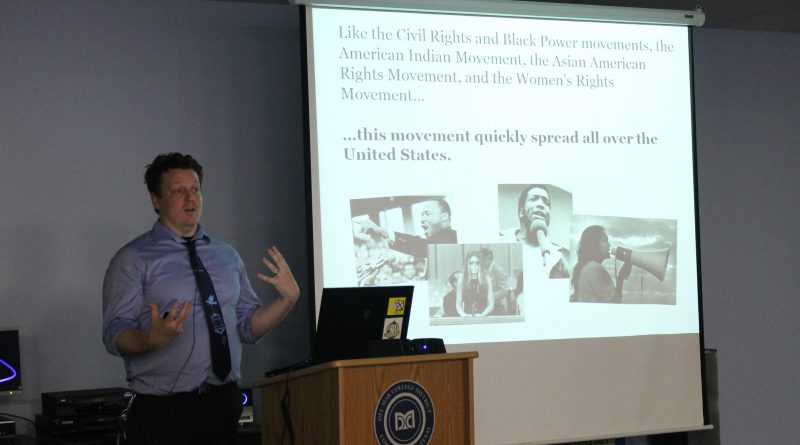 Dawson Barrett, a history professor and author of “Teenage Rebels,” spoke with students about the proud traditions of Mexican-American high school activism as part of Hispanic Heritage Month in 2015.

DMC professor’s second book comes out on May 8

History Professor Dawson Barrett will be publishing his second book about protests in America.

“The Defiant: Protest Movements in Post-Liberal America” will be coming out May 8 and will cover the history of major protests and how America has changed with them.

Barrett has been an associate professor of history at Del Mar for five years. He earned undergrad degree at Portland State University in Oregon and got his master’s and Ph.D. at the University of Wisconsin at Milwaukee. His time in Wisconsin coincided with the a large labor protest in 2011, which he cites as a large influence for his thinking.

This is Barrett’s second book on protests, the first of which, “Teenage Rebels: Stories of Successful High School Activists, From the Little Rock 9 to the Class of Tomorrow,” recounted the history of high school activists from throughout history.

Dawson has been quoted on protests for NBC News and such publications as The Nation and The Atlantic, as well as his writing appearing in Teen Vogue, American Studies and more.

What interests you about protests?

My assessment of U.S. history is protests are a major factor in shaping how our society looks and how essentially everything good about our society is because people are willing to protest and make it happen. I am a big cheerleader on activism and people making the changes that they want to see.

With protests like the March for Our Lives, #MeToo, March for Science and more, what do you think is changing about protests?

One thing that is clear to me is that if you look at history, there have always been protests, but they are easier to access with social media. Twenty years ago, you maybe would have heard about the one in town not the ones across the country. But with Twitter, you see thousands of pictures and stories, which I think helps build protests.

We are also at a moment in U.S. history where there is a lot of frustration with politics and more precisely since the election of Donald Trump. This isn’t a comment on his politics, but one of his strategies to fire his base up is to target groups of people, whether it be famously tweeting about politicians or about women, young people, LGBT folks, or veterans like John McCain. He has built a large opposition of all different types of people to him who don’t often feel a part of the political process.

To put it simply, this is an angry time in history, where people don’t feel like they are getting what they need and are doing something about it.

What was your inspiration for writing a second book on the topic?

Well, they actually go in the reverse order. It’s based off of my dissertation, so this is the book I have been working on for 10 years. Part of the way academic books work is that you send it off to people to read it and make notes and get it peer-reviewed. So while I was waiting for some notes to come back on this book, I wrote my first book in about six months, which goes over some of the topics in my new book, but more from a high school student prospective.

Since you’ve been working on this book for 10 years, there must be something that you want readers to take from it? What was the goal of writing this book?

My kind of political awareness came from the war in Iraq. That was happening when I was coming of age politically and made me really curious to understand what was happening. There was a lot of talk during the time about the war and the protests of the ’60s and I wanted to know how those protests affected things and how that connected to that time.

This is a book geared toward college students and I wanted it to be something that the angry and curious 20-year-old could pick up and learn without having to get a Ph.D.

[Laughs] Exactly! It is for people who are trying to understand the framework the ideas at the top and the policies, but also the pushback from those. For me, what is so inspiring about teaching history is finding these examples of people who you’d expect to be completely powerless have nonetheless stood up for themselves and pushed back. These are stories that have fallen through the cracks when we talk about the powerful people such as presidents. I’m more into talking about everyday people.

Do you offer extra credit for students who read the book?

[Laughs] No, I don’t think that would be ethical, but I do draw on my research when I teach, so I do think this book is an extension of my class. I think if I did, I’d have some dual-credit students starting protests at their schools and tracing it back to me, which I don’t think would go over well.

For information on where to buy Barrett’s books, visit www.dawsonbarrett.com.