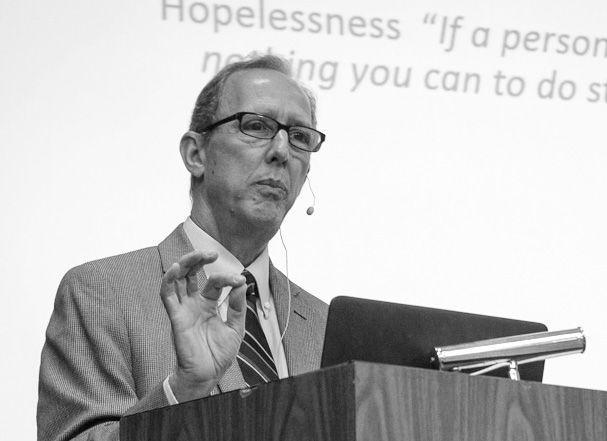 “Only 41% of people with a mental illness will access mental health services,” Potter said.

Potter said one reason events surrounding mental illness are becoming more common is because of problems such as school shootings.

“People want more awareness in subjects like this,” Potter said.

She also gave information about resources in the Coastal Bend that are free and available to everyone in need of them. An organization she spoke about was a program through Nueces Center for Mental Health and Intellectual Disabilities called the Crisis Intervention Team, or CIT.

“The CIT is embedded with CCPD along with crisis intervention-trained officers in response to 911 calls with behavioral issues, including substance abuse/dependence,” Potter said.

Potter plans to grow the CIT to be a 24/7 program, instead of the 7 a.m. to 11 p.m. Monday-Friday hours they have now. She also wants to grow the staff from having one officer and two case managers to having enough to help more than one call at a time.

Many of people in attendance were licensed professionals in this field. One woman in particular was Connie Rodriguez, a licensed social worker at WellMed Medicare Advantage. Rodriguez went to the symposium to gain more information for her as well as the doctors she works with. Even as a social worker in the area, there were some things she learned from Potter that were surprising.

“I didn’t realize just how many resources were available and that the programs were free,” Rodriguez said.

Along with the Crisis Intervention Team, another resource available is the National Alliance on Mental Illness (NAMI) Greater Corpus Christi. They offer mental health education and support including family support groups, support groups for adults with mental conditions and more.