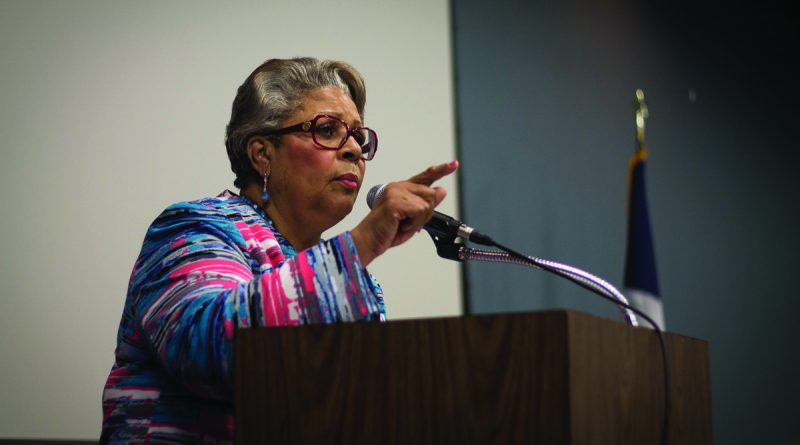 Hunter was accompanied by many experts to give advice for someone who may find themselves affected by human trafficking. Guest speakers included Texas Attorney General Ken Paxton and Bishop Michael Mulvey.

Ruben Bernal, life coach for an agency aimed at victims of alcohol and drug abuse called The Council, was welcomed at the summit along with several other agencies in an effort to provide resources.

“Our main goal is to provide resources,” Bernal said. “We meet them where they’re at, offer the resources and get them the help they need.”

President and CEO of United Way of the Coastal Bend, Katherine Wilson, gave a speech to shed light on domestic violence.

Wilson explained that domestic violence became a widespread issue in the 1970s, making 1 in 4 women a victim.

“A woman is beaten every 9 seconds in the United States,” Wilson said.

“Individuals traffic other people for their own personal interest,” Mulvey said. “For their own selfish gain.”

Mulvey took his time explaining the complicated topic and gave the underlying guide to dealing with these life events in a practical way.

He attributed much of the reasoning for targeting victims as alienation. Many victims of human trafficking are alienated because of economic status, educational situation or various other reasons.

Mulvey stressed the personal issues that the trafficked or trafficker might encounter as they try to understand the complexity of these situations.

“Human trafficking constitutes a shocking offense against human dignity,” Mulvey said. “The sexual exploitation of women and children is repugnant.”

His discussion gave the raw truth and reality that many victims face that we see in everyday life.

The summit not only provided information but a safe haven of people that can be trusted and want to help.

Wilson explained that the topic of discussion is rough.

“Being here is hard, but you’re making a difference,” Wilson said.