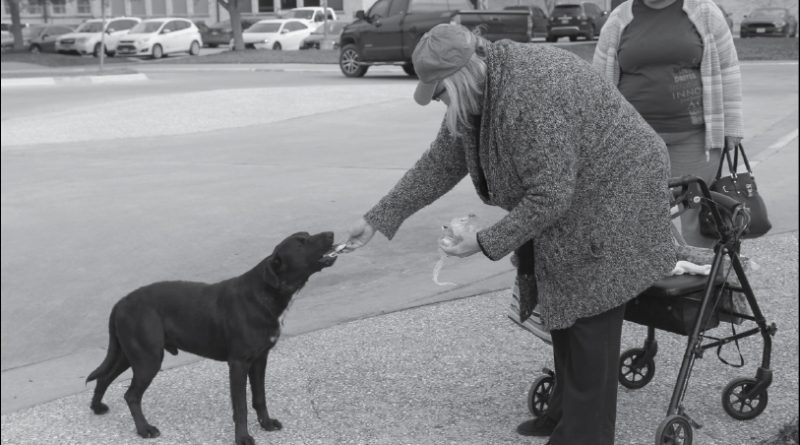 Del Mar student Coleen Newman shares her lunch with Fred, a stray dog, in spring 2018. Several more strays have been seen this fall.

As humans we tend to have a furry companion or two we keep close to us. Pets are an important part of most people’s lives, but what about when they’re just random animals roaming the streets?

“People who are familiar with dogs let their guard down,” said Lauren White, Del Mar College chief of security

Strays are a serious issue that the campus has faced in past semesters. However, we don’t always think about the animal’s perspective when we see these furry creatures on campus.

“When you smile at a dog he thinks you’re baring your teeth at it. We don’t take it as that but they do,” White said.

Strays are an issue in any community, but sometimes certain actions can bring them into a certain area and cause many problems. In recent semesters cat food has been seen in small portions around the Harvin Center.

“When you put food for a cat it doesn’t need to control the mice problem because it’s not hungry,” White said.

Students have voiced a concern about animals on campus and how they could be handled if the situation were to escalate.

“Del Mar has a variety of programs and centers dedicated to a wide range of hobbies, clubs and help centers. I don’t see why we can’t have a program dedicated to taking in these strays,” said nursing major Chai Miller.

When thinking about strays we tend to lean toward cute, vulnerable animals that have a curiosity about what’s around them.

“Strays are cute and everything but what if there was a stray that wasn’t friendly, then what?” said nursing major Cierra Derricks.

When dealing with strays it is best to leave the animal alone. If the animal shows aggressive tendencies then students should report the animal to the security office.

“There’s an ecosystem that could be sustained if we didn’t interfere in it,” White said.