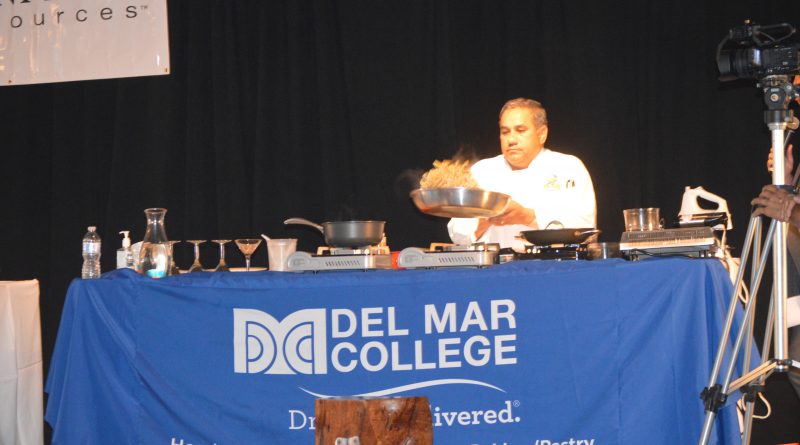 Upon entering, guests were immediately smacked in the face by a wall of aroma from the numerous tables lined up around the edge of the room. Several local restaurants were presenting sample sizes of their signature dishes, all competing for the title of Peoples Choice at Corpus Christi’s first Chef Showdown.

Foodies who attended the event, which was originally planned for 2017 but had to be delayed due to Hurricane Harvey, were treated to dishes including decadent Mexican Chocolate fudge in a miniature waffle cone, Anything Goes Stew made with anything and everything you find in a pantry, and Gnocchi in a truffle cream sauce.

Organizers hope to make this an annual event, but it has plenty of room to improve if it does return.

The September event featured three rounds and five of the best chefs from the Corpus Christi area. Each round had a secret ingredient that must be used in the dish.

Round one was between Chef Dean Sprague from the Omni and Del Mar’s own Culinary Arts Instructor, Israel Villanueva. Their secret ingredient was cabbage. There were four celebrity judges including Pepe Serna, a Corpus Christi native best known for his role in “Scarface.” The first round was close, going to Sprague by only 3 points.

The second round featured Kris Busk from the Shoreline Sandwich Co., Tony Nichols from The Exchange and Ricci Neer from Toasty Cup Catering. Round two, with its secret ingredient of dried cherries, was won by Nichols.

Sprague won the competition. In his victory speech, Sprague encouraged more chefs in the area to come and participate next year. After the winner of the showdown was announced, the winner of the Peoples Choice award was revealed. Shoreline Sandwich Co. took the victory with their Gnocchi and truffle cream sauce.

All in all the event was a success, but if they want to make it an annual event, some things would need to be done a bit differently next year. The dishes that were made by the contestants were not described to the spectators. The food was simply delivered to the judges by servers when it should have been presented and described by the chef who cooked it. It also would have been nice to hear some of the reactions and criticisms of each dish from the judges. They need to do a little more to keep the spectators entertained and involved throughout the event.

If organizers make these changes, the Chef Showdown has the potential to grow to an event of gastronomical proportions.