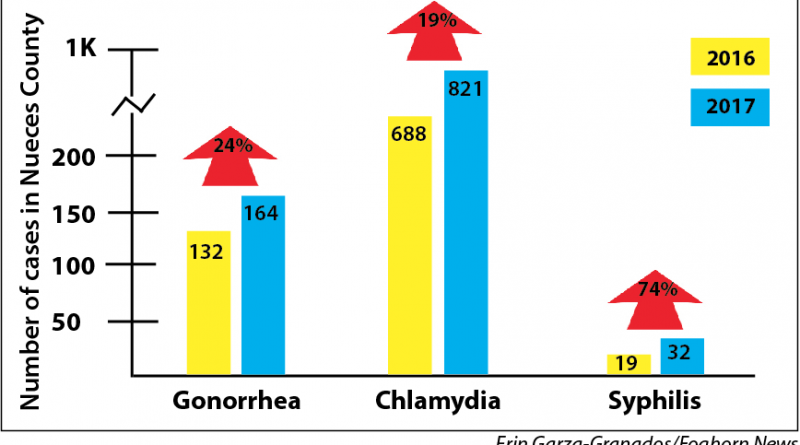 When it comes to being a sexually active adult it is important to practice safe sex with contraceptives. According to the Women’s & Men’s Health Services, there has been an escalation in STD cases throughout the county within the past three years.

“We’ve seen a significant increase in the number of people being tested and also in the positivity rates,” said Amanda Stukenberg, CEO of the WAMHS. “There are a variety of factors. There is more sexual activity among multiple partners; some of the dating and hookup apps have contributed to more partners.”

A false belief in birth control has also lead to the increase in unprotected sex.

“There is more effective birth control which leads people to worry less about getting pregnant, so people are not using condoms because they don’t have the dual fear of STDs and getting pregnant,” Stukenberg said.

People are more aware about STDs than during any other time in history. Yet, WAMHS have gotten more patients who believe it is better to go in and get treatment and hope it goes away rather than using contraceptives.

When it comes to chlamydia, the most affected age group is college students ages 18 to 24, and more are female. Chlamydia is a bacterial infection that is easily cured. It is also a silent disease and many don’t feel the symptoms. In women, if they don’t get treated it could lead to infertility. Men usually show no symptoms but can be a key factor in transmitting it to women.

Gonorrhea also mostly affects a younger age group, mostly sexually active people under 25. This disease can be contracted by both genders though unprotected sex, and through childbirth of an infected mother. Sometimes symptoms may not appear, but for most it can lead to painful burning sensations, redness, swelling and pain.

Syphilis is another STD that has seen an increase of 74 percent within our county between 2016 and 2017. Most of these cases are affecting a slightly older demographic, but that doesn’t mean it won’t affect any other age group. This STD can also be easily cured with the right treatment, but left untreated it could lead to serious complications.

“It is surprising how many people had no idea they might be at risk,” Stukenberg said.

When it comes to the public school system, the Corpus Christi Independent School District is required by state regulations to use an abstinence-based curriculum. While it is emphasized that abstinence is the only method that is 100 percent effective in preventing pregnancy and STDs it could lead to less knowledge of proper contraceptives.

According to Texas law, schools may discuss condoms and contraception but only in terms of human-use reality rates and not theoretical laboratory rates. This refers to “typical use” of condoms. This is normal human condom/contraceptive use including incorrect or inconsistent use of a condom. Examples including the condom breaking, or not using a contraceptive each time a person has sex. Human-use reality rates are typically lower than theoretical laboratory rates.

Theoretical laboratory rates refer to “perfect use” or when a person uses their condom/contraceptive method consistently and correctly. These rates are calculated in laboratory studies, where perfect use can be verified.

School districts are not allowed to distribute condoms to students either, but may conduct condom use demonstrations. While demonstrations and abstinence may seem ideal to preventing STDs and pregnancy it still does not give students a proper alternative when it comes to protecting themselves if they choose to be sexually active.

“You have to be selective in your choice in partner,” Stukenberg said. “It is good to get yourself tested and ask your partner to get tested and to use condoms as a main protection.”

Stukenberg also states there is a misconception of who gets STDs.

“We see just as much infection on college campuses as we see as we go to the jails,” Stukenberg said. “There is a false sense of security if someone is an attractive good student who seems to have their act together and think they are less likely to be infected, which contributes to the spread of the infection.”

If people do have an STD and don’t get treated it could leave blisters and openings in the skin which makes them more susceptible to other STDs such as HIV and the herpes virus.

“Get your courage up and come in and get tested so you can help avoid something more difficult to cure,” Stukenberg said.

“Our goal is to help people prevent infection, cure as many as they can or manage viruses that curate for life and have people make better decisions and better choices so their long term health is not impacted,” Stukenberg said.