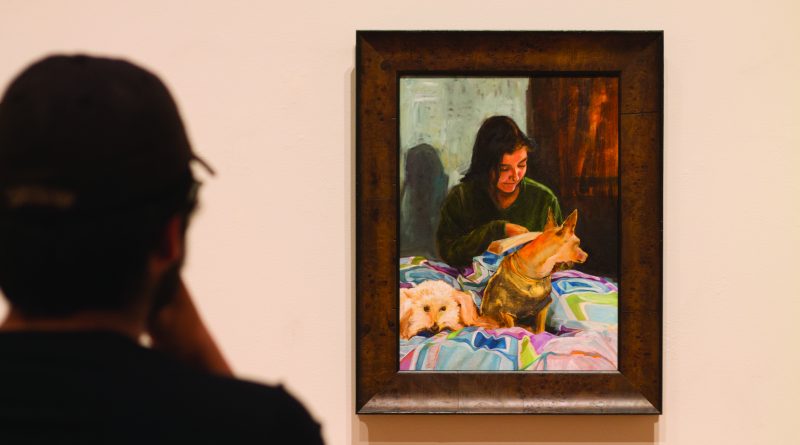 The Joseph A. Cain Memorial Art Gallery showcased original art from more than a dozen Del Mar College faculty members as it kicked off the annual Faculty Art Exhibition on Sept. 21.

Artists such as Amorette Garza, Gerardo Cobarruvias, Ken Rosier and Kerstin Dale made a special appearance and greeted the crowd. The artists discussed with the guests the meanings and inspirations behind each creation.

The variety of digital prints, stoneware, paintings and mixed media had one thing in common — they were created with passion.

During the exhibition, the public socialized, enjoyed hors d’oeuvres and sipped refreshments. As they circled the gallery to admire the works, some noticed that each portrait and canvas complEmented the pottery and statues that decorated the room.

Pottery maker Ken Rosier enjoyed the evening for its ambience and Mexican cuisine. At the gallery he found himself astonished by the amount of personality and expression within the types of media.

Rosier, an artist presenting his work as well, said it is an honor to be able to “provide the public high-quality art.” He said each of his creations was a product of love, time and dedication.

Art major Sarah De La Rosa was accompanied by her colleague Vanessa Garza. The two students were mesmerized by the continuous pieces of art, including “Walker Glacier 2, Alaska,” photographed and printed by Kerstin Dale.

“Each creation is a million words in one moment; time becomes frozen,” De La Rosa said.

She defines every piece as an opening through someone else’s eyes. De La Rosa, an artist herself, symbolizes art as visual representations of emotions, expressions and perspectives.

The exhibition will run through Dec. 5 in the Joseph A. Cain Memorial Art Gallery in the Fine Arts Center on East Campus. For more information, call 361-698-1216.