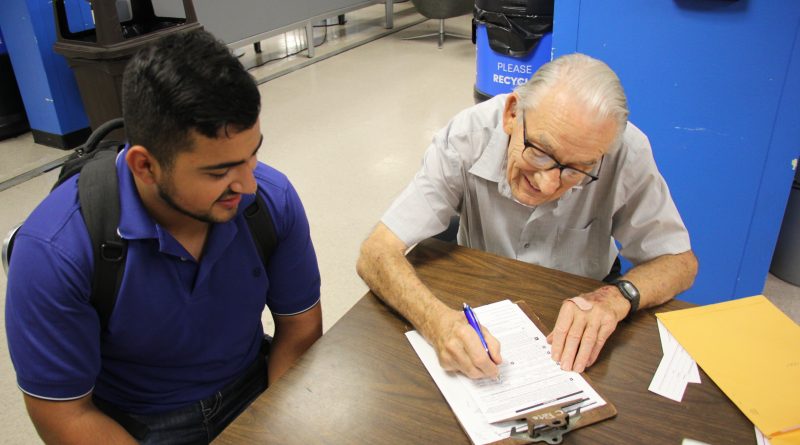 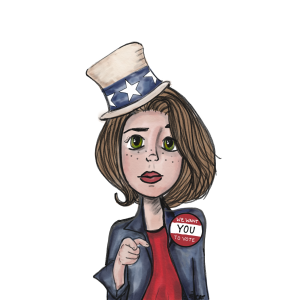 Turning 18 comes with a lot of milestones, but voting is especially important this year because it’s the midterm election after the controversial election of President Donald Trump.

Collegiate High School senior Sam Muilenburg grew up hearing about the day of her birth because it fell on the unusual election of George W. Bush and Al Gore in 2000.

The vote in Florida was too close to call, which left the nation without knowing which candidate would become president. The United States Supreme Court eventually ruled to stop the manual counting of votes in the state. On Dec.13, Al Gore conceded. Muilenburg was a month old before Bush was named president.

“I am really excited to go because it’s my birthday, but also I was also born on the most contested election in history,” Muilenburg said. “Things need to change. We live in a small bubble and we can make an impact.”

With parents who voted every election, Muilenburg said they never pressured her to vote. They raised her to be thoughtful and independent. This, combined with living in a fairly liberal household, influenced her to vote on her birthday.

“With both of my parents being educators, politics was definitely something important. They wanted me to be very aware of what’s going on in the world,” Muilenburg said. “I consider myself a hard-core feminist.”

On the night of the 2016 presidential election, Muilenburg was in driver’s education. She recalls stopping at every stop sign and her teacher checking the polls. People across the country were watching their televisions in anticipation of who would win.

Muilenburg remembers the women’s march was a few days after Trump’s inauguration.

“We saw it all over social media and it was a relief after the election,” Muilenburg said. “It shows people are really willing to band together and there was really great power and strength.”

Brandey Batey, candidate for City Council At-Large, said millennials, who represent 31 percent of the population, are the largest group of first-time voters. This puts them in a position of power.

“It is not a position to take lightly and it is important to be an educated voter,” Batey said. “First-time voters have a very important role this November and in the years to come.”

This year is a midterm election, which means voters will be selecting the House of Representatives, Senate and state and local politicians.

John Garcia, another candidate for City Council At-Large, said voting may not be something that affects your life right now, but it will in the future.

“You might not yet be struggling with issues like college debt or finding a full-time job. For many millennials, adulthood brings many new challenges, like college, marriage, buying a house, paying for your own health insurance, and/or starting a business, all of which could radically change your perspective on political issues,” Garcia said. “While you can’t predict who or where you’ll be in four years, you can be sure that the political officials elected into office and the policies they implement will impact your life in the coming months and years.”

According to the United States Census Bureau, 18- to 35-year-old voters increased 1.1 percent from 2012 to 2016, while the other age groups remained the same or declined. The increase of young voters was unexpected because typically they make up the smallest percentage of voters. In the 2014 midterm election, Corpus Christi had 30.56 percent total voter turnout, according to Nueces County voting statistics.

Voting for the first time can be intimidating. There are many things that must be done before voting, including registering and researching the candidates. After that, there is the unknown element of walking into a voting center for the first time. 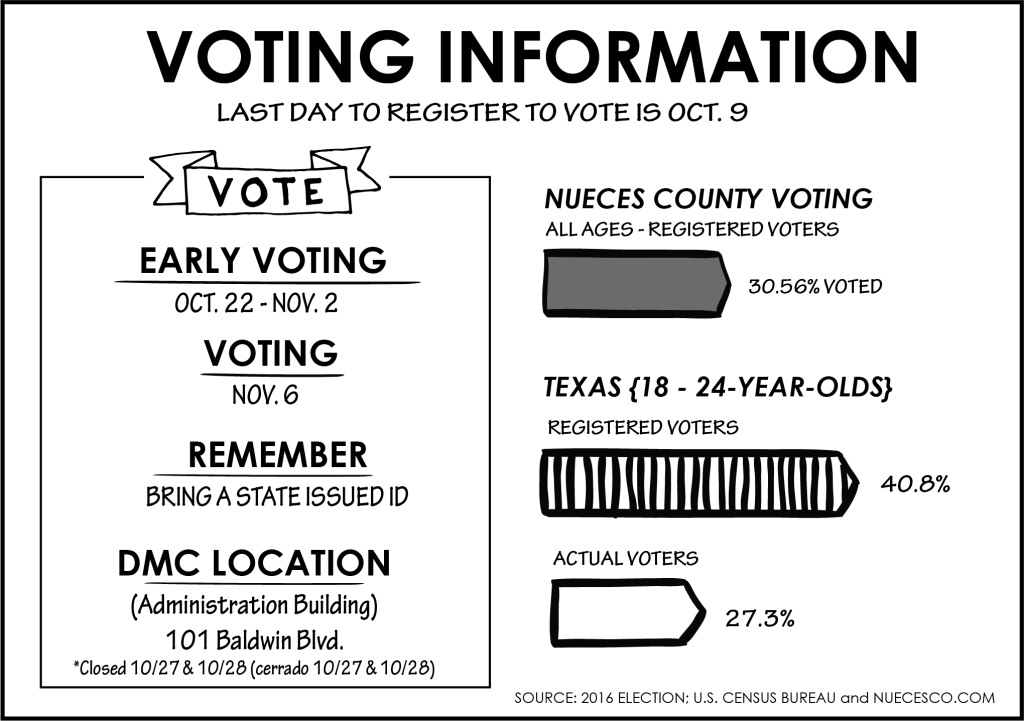 Eric Rodriguez, candidate for City Council District 5, said he was nervous the first time he voted. He prepared by researching all of the candidates and their platforms.

“Voting was user friendly, everything is in a private space on a touch screen. Afterward, I felt very empowered and I had become part of something bigger than myself,” Rodriguez said.

There are numerous websites dedicated toward providing people with information on candidates at federal, state and local levels. Muilenburg recommends www.vote411.org, from the League of Women Voters, to research candidates.

LGBT rights, border policies, universal health care, gun laws and abortion rights are just a few of the issues that our federal politicians argue on our behalf. However, at the city level, our city council and mayor are responsible for voting on new laws and bonds for Corpus Christi. The people who are placed in these positions hold a lot of power over the future of our city.

State representatives, along with our governor, are responsible for passing bills that affect the state as a whole, such as legalizing marijuana and raising taxes.

“Get to know the candidates. Attend forums held by local organizations. Reach out to the candidates so when you walk in to cast your vote, you do it with confidence that you are putting the right person in charge of our future,” Batey said.