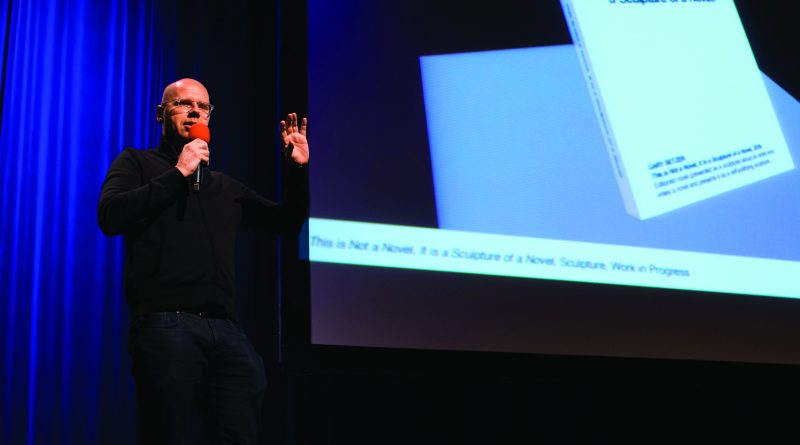 Gary Setzer, a visual performing artist, visited Del Mar College to give a presentation called “On Language, Ghost, and the Tautological.”

DMC art students and other members of the community attended the Oct. 29 event in Richardson Performance Hall.

“I thought the presentation was interesting,” said 19 year-old Art Major Emily Valerdi. “It was a different type of art and I feel art is way for me to communicate.”

Setzer’s art includes performance art, video art, live sound and language. “I perform musically in front of a video projection that also features me; my process-engrossed body executing repetitive tasks while situated in the landscape,” Setzer said in a statement on his website.

Some of his pieces consist of him performing tasks like marking his path with chalk from his home to his studio, stacking foam letters from his mouth, even him running to a pile of dirt and putting dirt into his mouth!

“I wanted to bring him over because I want our students here at Del Mar to be exposed to this kind of art,” said DMC Assistant Art Professor Kerstin Dale.

When he was about 4 years old, his interest in art started when his sister came home from kindergarten with a drawing of a haunted house. “I was so blown away that she was able to depict this scene with ghost and witches. I wanted to do it so bad and I couldn’t wait to go to school the next year because I wanted to draw this,” he said.

Setzer attended the University of Akron, where he completed his BFA, and earned his MFA at Ohio University. His work has been shared around the globe in different venues such as the Arsenale in Venice, the Today Art Museum in Beijing, Tribeca Film Center, The National Art Center Tokyo and others in the U.S.

“I hope that I get people to re-frame art,” he said. “There is research that proves art creates empathy. It helps us being able to put ourselves in people’s shoes more and I think the time is ripe in the world right now that we need empathy like we’ve never needed before.”