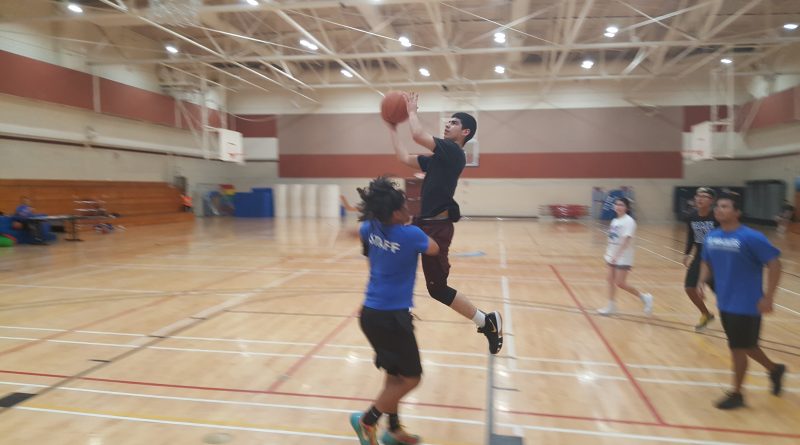 3-on-3 Basketball wrapped up at intramurals with team AMP1 defeating team Blues Clues to win the championship in a rare Saturday tournament.

Standard 3 on 3 rules applied, with a “make it take it” format, and baskets counting for 1 point inside the 3 point line, and anything outside the line counting for 2 points.

In game one of the three-game series, Victoria Rabagos, the only female participant in the series, outshined everyone on the court. She scored 8 of the team’s 15 points, splashing in a couple of long-distance shots, mid-range jumpers, and scoring a couple of buckets under the basket.

“I played basketball in high school, so it’s been a real long time since I played. But it’s always fun to be out here and get away from classes,” Rabagos said.

In game 2, Blues Clues bounced back and played disciplined and defensive. Josh Fernandez played an assertive game, scoring from all sides of the court, pulling down rebounds and assisting teammates for baskets. Fernandez finished with 10 of his team’s 15 points to lead Blues Clues to a 15-13 victory in game 2, and leveling the series 1-1.

The final game of the series began with AMP1 pulling away 8-3 early, and the team never looked back the rest of the contest. AMP1’s Rick Garcia was a presence in the paint. He dominated the inside game and rebounding, putting up 7 points and grabbing offensive rebounds at will.

“I used to play basketball in high school but I also have a basketball class too during the week. It’s good to play and I am a kinesiology major, so this is my field,” Garcia said.

“I play organized basketball elsewhere, so it’s just another day of showing up and playing out here on the court. I like it,” Perez said in the post-game interview.