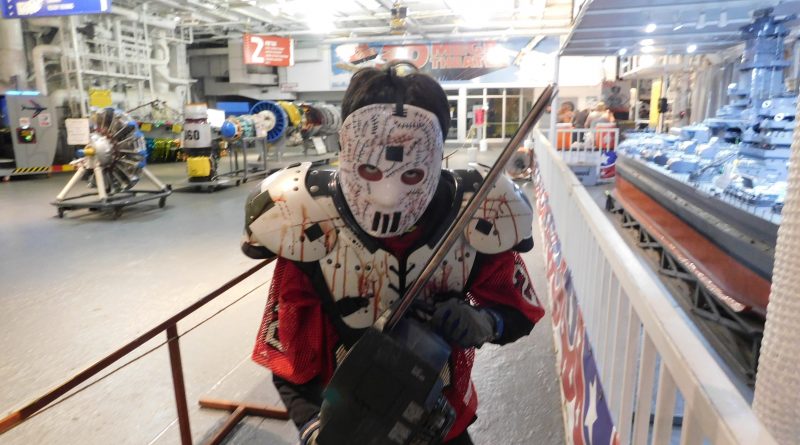 Since being decommissioned as a naval aircraft carrier in 1991 and her arrival in Corpus Christi in June 1992, where she now operates as a floating museum, the Lexington Museum on the Bay has become a popular tourist attraction in Texas.

But in recent years during October, visitors have had an added event taking place on the Lady Lex to explore and experience, the annual Haunting on the Blue Ghost haunted house, sponsored by Castle of Terror productions. The event marked its seventh year in operation this October, and proved highly popular with all those seeking upscale thrills and terror during the Halloween season. An estimated 4,238 visitors attended this year’s event, organizers said.

The spine-tingling tour began on a descending ladder entryway just adjacent to the IMAX mega theater, where visitors were soon exposed to a terror-filled mix of nonstop mayhem, such as creaky hatchways; loud, menacing pounding on hull walls; dimly-lit corridors; and chilling sound effects, such as screams, moans and howls. Grotesque looking skeletons and mannequins positioned throughout the house added to the scary atmosphere.

In addition, actors dressed in costumes and gory-looking makeup were positioned in various spots along the house’s route, where they snuck up on guests unexpectedly.

“Most of the actors who perform in the house are students from area high schools,” said Jacob Hunt, assistant and tour guide with the Lex. “A few are actual drama majors whose presence really enhances the effect of the haunting experience.”

The husband and wife team of AB and Christina Arrisola served as official sponsors and route guides during the event, which concluded Nov. 3.

For information on next year’s haunted house schedule, as well as other events taking place on the Lexington, visit www.usslexington.com.