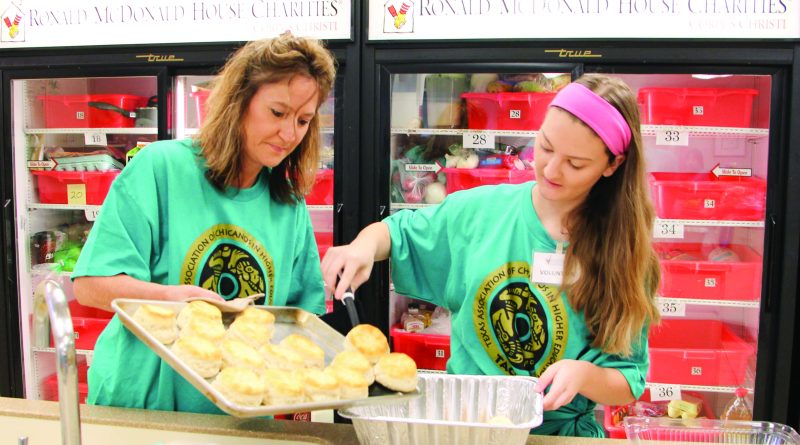 Several Del Mar staff members and other volunteers spent the morning Nov. 17 preparing eggs, sausage, biscuits and other breakfast items for the families staying at the Ronald McDonald House.

Twice a year, members of the DMC chapter of the Texas Association of Chicanos in Higher Education volunteer their free time to support those going through difficult times.

“This is a community project,” TACHE member Rosa Reynoso said. “We’ve done this several times and it’s like the first time every time.”

TACHE has been doing this project for at least 10 years.

“It’s a very rewarding experience,” Reynoso said. “It means a lot to them. This is an opportunity to show them that we care.”

Chris Hernandez, chairman of Del Mar’s TACHE chapter, said participating in the breakfast-making was a no brainer for him.

“This is an opportunity for Del Mar employees to give back to the community,” Hernandez said. “For the most part, everyone loves to be here. We always have a positive reception.”

Reynoso said TACHE did lots of events, but this one stuck.

“A previous group used to do dinners on the weekday,” she said. “Saturdays are easier though, since it’s only a couple of hours and a family affair. It also lets the younger volunteers see what the Ronald McDonald House does.”

“When we were living in North Dakota, we had some medical issues,” Weis said. “The Ronald McDonald House was very helpful, so we wanted to give back. We tried to come last time, but there were too many volunteers, so we couldn’t.”

About 15 volunteers showed up to the event this time, one of whom was Valdar the Viking.

“We usually have at least 11 to 12 volunteers,” Reynoso said. “Also, we sometimes have three or four retired employees.”

Ben Morin, a retired DMC employee, said he has participated in the event for at least four years.

“Last year we did Thanksgiving dinner and then a breakfast in the spring,” Morin said. “We wanted to provide a service to the community and this one is close to Del Mar.”