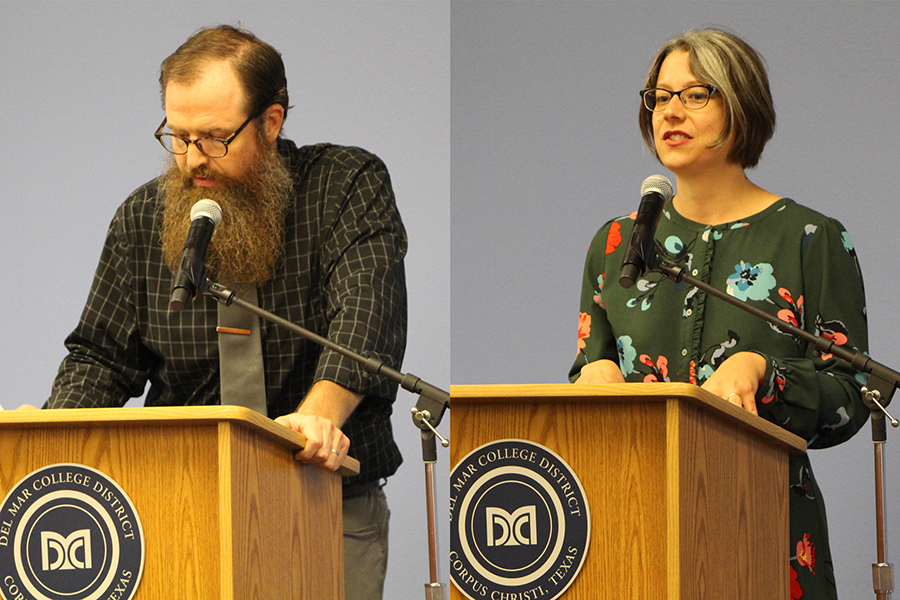 The Department of English and Philosophy and Learning Resources recently hosted a memoir and fiction reading by faculty members Sarah and Kent Lenz.

The couple had the opportunity to share their creative writings as each of them read a short story to the audience Nov. 7 in the White Library.

“It dawned on me the other day that I haven’t given a reading in six years,” said associate English professor, Kent Lenz who has been with Del Mar since 2014. “And two things came to light which was one, I should probably take one of those creative writing classes Sarah offers and two, I was going to read what I read last time but who wants to hear old stuff.”

Kent had brought out an old story, “They Were Fine in the Graveyard”, that had been put away for six years.

The story tells of Benjamin and Jenny, who cover a closed store’s graveyard shift on the night before Thanksgiving, and end up stuck in the store during a city-wide power outage. As the two workers continue to do their jobs while playing around, they eventually encounter a mysterious stranger who had been in the store the whole time.

As Sarah came up to read her story, she said it will also be an old piece as it was drafted in 2008. She said it had been rejected numerous times, but had been recently accepted and will be in the next Crab Orchard Review.

Her story, “Making Head Cheese,” is a nonfiction story based on her experience of longing to make the headcheese her grandma used to make that she once found grotesque and untouchable.

The story then continues with her adventure in not only figuring out how to make the dish but the entire process she goes through. In the end she realized that the dish wasn’t meant for her, but had learned a lot about herself from the experience.

Sarah is currently working on a collection of essays, “Before it’s Night Once More,” which consists of stories of accidents, confronting death head on, and anxiety in eventful situations.

“What inspires me to write is real life, because I write nonfiction so I’ll find these things in my life that I latch on to,” Sarah said.

Sarah also said writing for her was a way to keep a record, as you have a snapshot of a particular time and place of things that you do but also a reflection of what it truly means.

“Never give up on writing. You’ve got to be patient, find good writing mentors, read a ton and take good writing classes,” Sarah said.