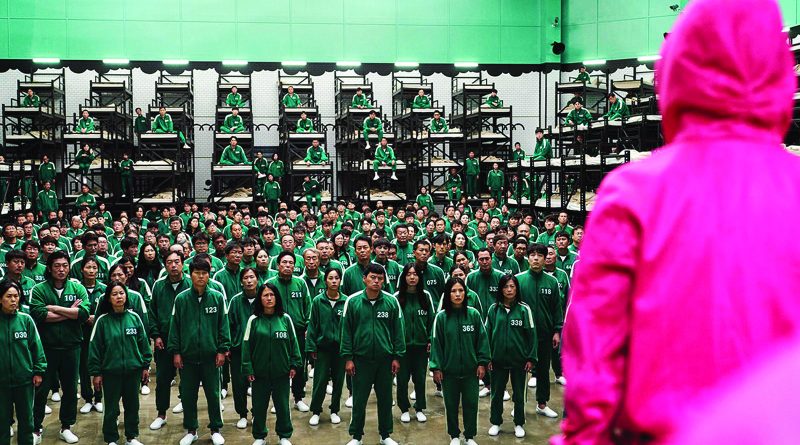 More than 4,500 players compete in "Squid Game," but only one remains at the end.

Netflix has released another mind-boggling masterpiece series, “Squid Game,” that quickly climbed its way to rank No. 1 in the U.S.

This South Korean series follows a broke and desperate Gi-hun (played by Lee Jung-jae), who is targeted to join the game. The reason for this target on his back? His huge debts that transpired by his gambling and drinking habits. In the start of the series, he is at wits end and has even signed over some of his body parts to loan sharks so when Gi-hun is greeted with this opportunity he takes his chances blindly in hopes of winning big money to pay off his debts.

However, he, just like the other 455 players, have no idea what is in store to win this prize money.

There are only three rules to the game, and all but one result in the “elimination” of players. It isn’t until the first game, “Red Light, Green Light,” is underway that we learn what elimination means — death.

While we meet other characters throughout the show, who we are told are all in the same predicament as Gi-hun, we learn not to get too emotionally attached to them. As the games go on the prize money increases, as does the death toll.

Each game is an adaptation of traditional games children would play in South Korea. The ultimate goal of each player is to be the last one standing; it is then that they win the entirety of the prize money. During the total of six games the audience gains insight on human interaction in the game and the relationships between players.

As the series escalates, the audience learns of corruption within the game’s system, while becoming mesmerized by the intricacy of the games, costumes and character development.

This series will leave you craving more and have you wondering: Would I participate in Squid Game?