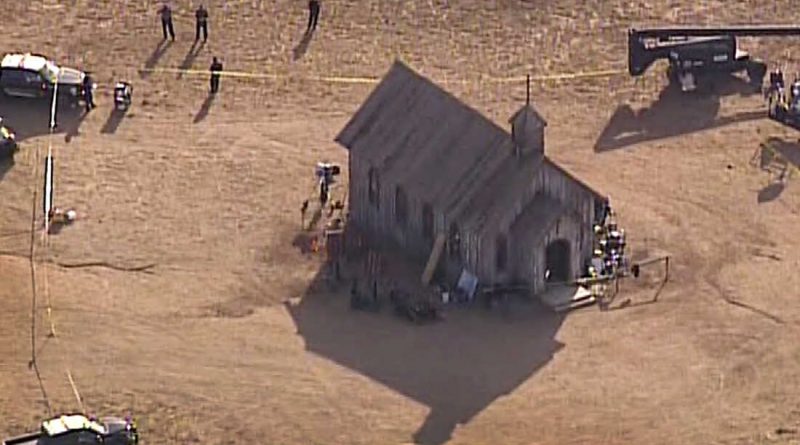 This aerial video image provided by KOAT 7 News, shows Santa Fe County Sheriff's Officers responding to the scene of a fatal accidental shooting at a Bonanza Creek, Ranch movie set near Santa Fe, N.M. Thursday, Oct. 21, 2021. Authorities say a woman has been killed and a man injured Thursday after they were shot by a prop firearm at a movie set outside Santa Fe. The Santa Fe County Sheriff's Office says a 42-year-old woman was airlifted to a hospital, where she died, while a 42-year-old man was getting emergency care at another hospital. (KOAT 7 News via AP)

What we know is that on Oct. 21, cinematographer Halyna Hutchins was fatally wounded on the set of Baldwin’s movie “Rust” after the actor pointed a “prop gun” at the camera lens and fired. Director Joel Souza was also wounded.

We know that after preparing the set that morning, including checking props, there was a break for lunch, and everyone was shuttled off set for food. What is not clear is whether props, including the Colt .45 revolver used by Baldwin, were checked upon returning from lunch, although some accounts vary on the safety check of the gun.

According to new reports, Souza told authorities that a camera crew had quit that morning and a new crew would have to come in, leaving only one camera to work with. Whether this has any bearing on the accident remains to be seen but we do know that somebody died and there needs to be accountability from every individual involved.

Investigators reported finding a combination of live rounds and blanks on the scene, leaving many to question why there would be live rounds on a movie set to begin with. There have also been reports that both Hall and Gutierrez-Reed had previous issues concerning safety on other sets. There was a previous complaint about the armorer from the set of a Nicolas Cage movie, “The Old Way,” where she allegedly gave a loaded gun to an 11-year-old actress without properly checking it, causing Cage to storm off the set.

From the point that Gutierrez-Reed handled the gun to the point where Hutchins’ life was tragically ended, all procedures for safety protocol on this set are highly questionable. Did the armorer show the assistant director the gun was clear before handing it to him and did he confirm? That detail is not clear. Did the assistant director show Baldwin that the gun was clear before handing it to him and did Baldwin confirm? This detail is not likely except that the words “cold gun” were heard prior to the fatal shot. Gun handling 101: 1. Always keep the muzzle in a safe direction. Baldwin pointed directly at the camera, reportedly to practice the stunt, something he could have easily done away from anyone. 2. Assume the firearm is ALWAYS loaded. Baldwin appeared to take someone else’s word that it was a “cold gun.” 3. Keep your finger off the trigger. Baldwin obviously did not follow this rule. Another rule is always ensure a firearm is not loaded when handing it to someone else and be sure that the chamber, barrel and action are clear before changing

2 thoughts on “Baldwin should share the blame in death”