M.A.P., or Minority Advancement Project, was founded in September 2011 by Ortiz Sr. The nonprofit organization focuses specifically on ethnic, immigrant centers, and services programs, showing minorities what’s out there to promote education and family. They project hosts the shrimp boil, book drives and coat drives every year to help raise money and awareness. Ortiz Jr. said this allows M.A.P. to take children to go see UT to promote their future education.

“It’s all about the children and showing them a better future,” Ortiz Sr. said. 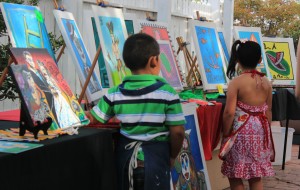 The event had live music, provided by Mariachi Torero, and had food and drinks for sale. There was artwork for sale from local minority students, who varied in age. The money from the paintings went directly to the student who painted them to help with their future. Many pieces of artwork, done by Lisa Hernandez’s students, were sold at this event.

“I am so proud of them,” retired U.S. Air Force Master Sergeant Julian Hernandez Jr. said. “That is my grandson selling the painting.”

“I came early because I wanted these two pieces,” event attendee Dana Stone said. “They are gorgeous, I just had to have them.”

The event had special guests Davis and state Sen. Leticia Van De Putte. Both senators were given a chance to speak and thank the community for their help. Van De Putte gave a rallying speech about supporting your community and told a humorous story about her family and how important family is.

Davis’ speech was about the community pulling together to make the children’s future brighter, she stated it was the one thing the constitution demands we do. Wendy Davis took a moment to sign a piece of artwork for the project and show her support for its future.