what it means
to be Chicano

A presentation of the book “Sagrado: A Photopoetics Across the Chicano Homeland” by Spencer R. Herrera and Robert Kaiser took place on Oct. 8 at Richardson Performance Hall. The lecture was sponsored by the DMC Cultural Programs Committee.

According to the foreword of the book, “Sagrado” is nothing less than a kaleidoscope using a lens of three mirrors to break apart and recompose its images. The personal narratives of Herrera, the photography of Kaiser and the poetry of Levy Romero complement one another and form a moving search to reconstruct the broken shards of the Hispanic American experience.

The focal point is New Mexico, near Las Cruces. The process consisted of each individual documenting what was important to them.

“Un lugar sagrado , a sacred place where two or more are gathered in the name of community, can be found almost anywhere and yet be elusive,” Herrera said.

“Sagrado” is neither a search for identity nor a quest for a homeland but an affirmation of an ever-evolving cultural landscape. In the book the authors provided another narrative of everyday people who strive to exist, but also who have flourished.

The authors wanted to honor the men and women who helped them get where they were at. Herrera’s field is Chicano literature and Chicano studies, and he wanted to document Chicano culture and especially how profound and rich it is. 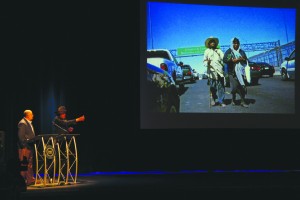 Every page begins with an epigraph, followed by a poem and a picture.

”The book is a good representation of what it means to be Chicano, no de aqui no de aya,” said Horacio Palacios, a Del Mar College student said. “My favorite photo was the photo of the man exiting what looked like a bar and the band playing at the exit. It speaks to what I know of Tejano men, work all day, and then go have a few beers before going home to the wife. It reminded me of my upbringing of having to go get my grandfather from the bar because it was time to come home and by the time I went to go get him he was inebriated and for my child self it was serious work to carry him home.”

“I bought the book because as a Tejano I feel that we need to preserve our culture for future generations. Once it’s lost it’s lost. Having a book on your bookshelf is a good way to show future generations that this is what it was like, this is who we are, and this is where we come from.”