The Early Childhood Club hopes to help comfort children in times of crisis with its sixth annual Teddy Bear Drive, which runs through March 13. During this time the club will accept donations of new stuffed animals to be given to the American Red Cross, which distributes them to children in times of disaster. Drop boxes can be found around Del Mar College.

The Teddy Bear Drive at Del Mar College started six years ago when the American Red Cross was invited to be a guest speaker at an Early Childhood Club meeting. The Red Cross mentioned that it also gives stuffed animals to children when they are victims of disasters such as house fires, tornadoes, floods and hurricanes. The club advisers for the Early Childhood Development program felt that it was a perfect fit for what Del Mar is encouraging the students to do in giving back to the community. 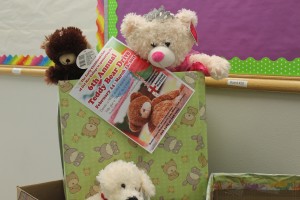 Del Mar’s first Teddy Bear Drive collected about 125 stuffed animals. Last year the drive collected more than 500. The goal for this year is to collect 600 stuffed animals. This year many of the interns have expanded the location of boxes by taking them to their worksites out in the community to promote the drive. If anyone from a club or in the community is interested in collaborating with the Early Child Development Program at Del Mar College, contact Benita Flores-Munoz at 361-698-2385. The club will drop off a donation box for the stuffed animals.

Flores-Munoz has been involved with the drive since its inception and is thankful for all the support from students and faculty at Del Mar.

Several boxes are located at Del Mar East Campus in the Center for Early Learning and Development, Rooms 121 and 122, and the Coles Building, Room 134. Other locations include the Center for Economic Development, Suite 114, located at 3209 S. Staples St., and on Del Mar’s West Campus in Health Science II, Room 126. The deadline for stuffed animal donations is March 13.