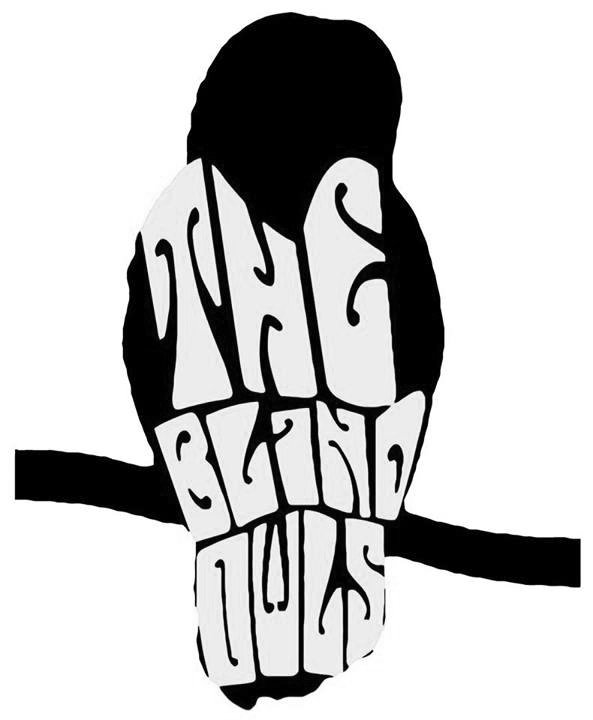 For this Tacos With Tera interview, I decided to take a few fans with me to meet The Blind Owls. Staff members Kaliegh Benck, Midori Allen and Raul Alonzo joined me for chips and salsa, good conversation and a gnarly photo shoot afterward.

Kaliegh: You’re playing at SXSW this year. How’d it go last year?
Carlos: Last year was cool. We did it at a coffee house but it wasn’t an official show, it was unofficial so there were less people. This year we’re on the official showcase with this record label from Pittsburgh that wants to sign us called Get Hip Records. We’re playing with the guy who owns the label. He’s in another band called The Cynics.

Kaliegh: Was there anything that happened last year at SXSW that you learned from and are going to change this year?
Carlos: I think it’s just coming prepared. Last year we weren’t really prepared. My chord was going out, someone busted a string, and we didn’t really have the equipment that we do now. We have backup guitars now. The past experience is really going to help this year.

Raul: Who are some of your influences?
Carlos: Of course, the Beatles. I really like The Beach Boys. I think the way they make the music is crazy good. (sarcastically) Ricky Martin, ICP …
Jesse: Nickelback.
Carlos: But yeah I really like The Searchers, a band from the ’60s, stuff like that.

Tera: Do you have a certain genre you are placed under?
Carlos: I don’t know, a lot of people have called us different things.

Jesse: I wouldn’t wanna say classic rock because, writing our own songs and stuff, it’s rock ’n’ roll. It’s just so hard to establish your genre and stuff because when you say that people think, “What kind of rock ’n’ roll?”
Carlos: Like Led Zeppelin you can consider rock ’n’ roll, Chuck Berry …
Kaliegh: There’s so many subgenres now.
Carlos and Jesse: Yeah, exactly.
Carlos: I was talking to Josh the other day about how he just wanted to keep playing cover songs, he didn’t want to write and he didn’t want anything serious. But it’s funny how it ended up turning into something serious. How a record label from Pittsburgh could be looking at us. It’s pretty cool.

Midori: Is Dylan your official drummer? I know you’ve been switching out.
Jesse: Not yet. He’s still on his trial session.
Carlos: Josh was our drummer and we tried out two other guys, that was really short lived. Once Dylan joined the band that’s when it really started coming together as a more serious thing and not just messing around in a garage.
Jesse: It came down to us just trying to find a drummer who was more committed to playing instead of just blowing it off and doing this or that. 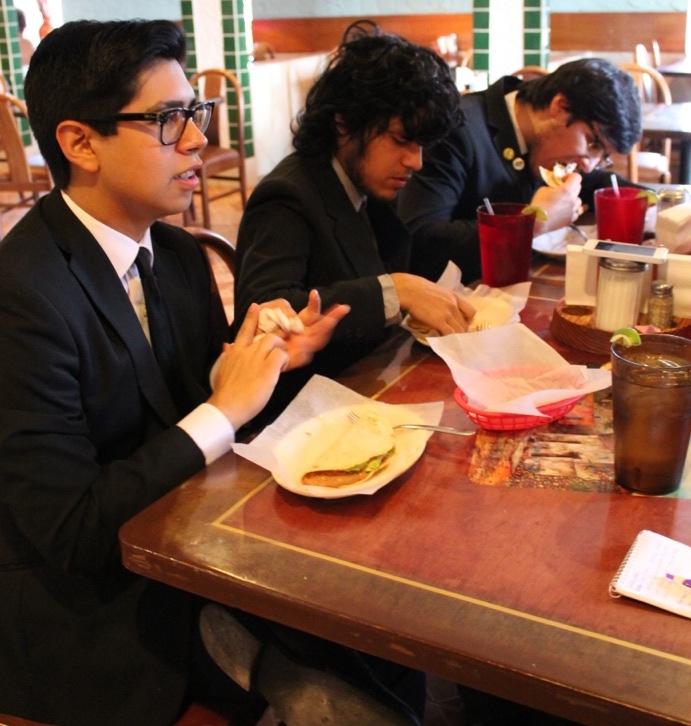 Tera: What made you guys decide on the matching suits?
Joshua: I think because of the style of music we play, it just adds to it.
Carlos: I think it attracts attention too in a way. It’s funny though when we’re not wearing the suits, people don’t really recognize us. Or they say we look weird.

Raul: Have you ever done a show without the suits?
Carlos: Yeah I did once. I guess I was having a bad day and was like … “these suits are stupid. I don’t wanna wear a costume!” Instead I wore a Cubs shirt.
Joshua: And sweatpants!
Carlos: It wasn’t sweatpants, come on. They were jeans.
Jesse: They were sweatpants. The gray ones.
Kaliegh: Like pajama pants?
Carlos: No, no, they were those pants from PacSun.

Kaliegh: I need to know how many matching suits you have.
Joshua: We don’t really have matching suits. We just go to thrift stores and buy them.
Jesse: I got this one for $1.
Joshua: It’s because he (pointing to Jesse) has to wear boy suits.
Kaliegh: But like color theme?
Joshua: We wear black, blue and gray. We don’t wear blue as much because they are all different so it’s not as cool. Also we wear vests.
Carlos: They were talking about leather jackets but I don’t want to be The Artic Monkeys (laughing). I mean they’re cool and all but …
Jesse: I don’t want to be wearing a leather jacket when I play. I like it when I’m cold but not when I play. I sweat enough in this (tugging at jacket).

Kaliegh: So what is your favorite venue to play?
Carlos: Studio B.
Joshua: Yeah Studio B.
Jesse: Victoria Downtown Bar and Grill.
(laughter)
Kaliegh: I think your style of music is very well-suited for Studio B.
Joshua: Ya I think that’s the fun-est.
Carlos: Cause it’s not like a bar …
Joshua: There are no rules. It’s not as formal.
Carlos: People come to listen to music, not to drink beer. They just come to hangout.
Joshua: It’s like the perfect blend of a party and venue at the same time.

Kaliegh: What about your favorite show you’ve ever played.
Jesse: The demo release.
Carlos: Probably the demo release. I think it was last December.
Joshua: That one just because we built it up so much and it was a really special time for us.
Carlos: It was huge.
Jesse: It was packed.
Joshua: For every band there was a huge crowd too.

Tera: Have you guys ever been on tour?
Joshua: Not really, no.
Jesse: We just play out-of-town shows.
Joshua: We’re releasing something soon so hopefully we’ll travel around Texas or something. 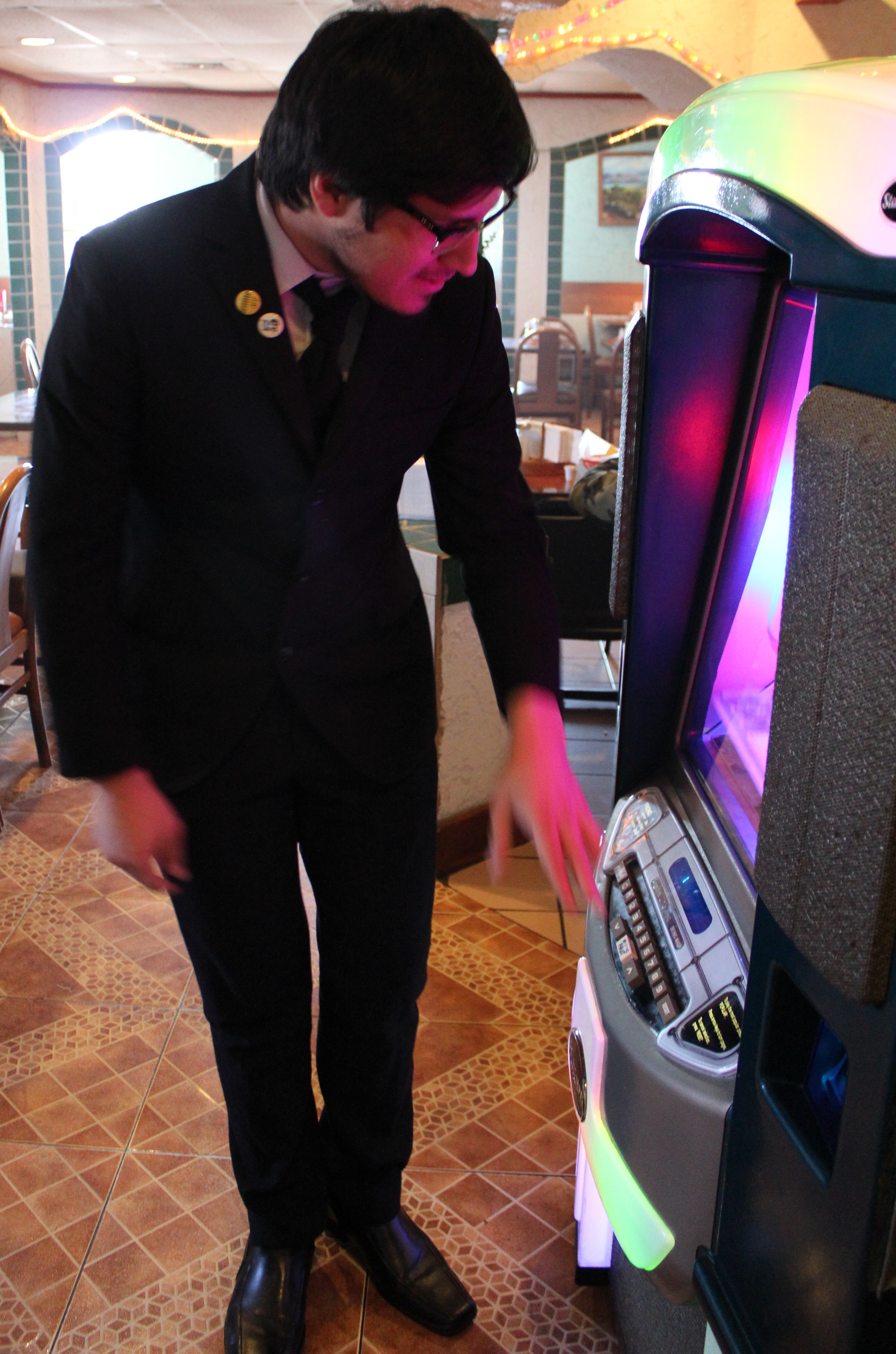 Midori: Is it a full CD or just an EP?
Joshua: It’s an EP because we’re going to release a full CD under a different label.
Carlos: We’re talking about it.
Jesse: Yeah it’s in the talks.
Joshua: We decided to cut this one back and just put out a full record with the label. It’ll still be fun though because we’ll release a few songs in between, some singles.
Carlos: At least try.
Jesse: We’re gonna try to release a two song vinyl. That’s what we’re releasing the EP on. It’s gonna be a six-song record and CD.

Raul: When does that come out?
Jesse: Hopefully by May.
Joshua: We literally finished the last of it Monday. We just did the last vocal take that we needed.

Raul: Do you see this as a possible career?
Carlos: That’s the goal.
Joshua: The label was talking about that too. They’re interested in serious bands that want to make it a career.

Tera: Do you guys see yourselves in the mainstream?
Carlos: Mainstream would be really cool.
Joshua: I think the not mainstream is pretty mainstream now.

Carlos: (biting into the taco) Dude that stuff is hot.
Joshua: Muy caliente!
Carlos: Can I have some more water?
Joshua: Give me some of the hot sauce. I wanna try it.
Kaliegh: Oh I never touch the stuff in the bottle. Just the salsa that comes with the chips that’s all.
Joshua: Dang, that is pretty spicy.
Jesse: (to Carlos) sounds like you’re out of breath.
Carlos: It’s freakin’ hot. Can I get some more water please?

Kaliegh: As far as your set list, do you guys have like one set list for all your shows or do you have a new lineup for each show?
Carlos: We kind of think of it while we’re on stage, we’re never prepared.
Joshua: We always say we’re gonna write one and then we never do.
Jesse: If we do it’s rare.
Carlos: Maybe we’ll have it on our cellphones but for SXSW we’re gonna have one set list and just practice that for the next month.

Tera: I have to ask a serious question now. How’re the tacos?
Carlos: They were great. Freakin’ awesome.
Joshua: They were good. This is my favorite place.