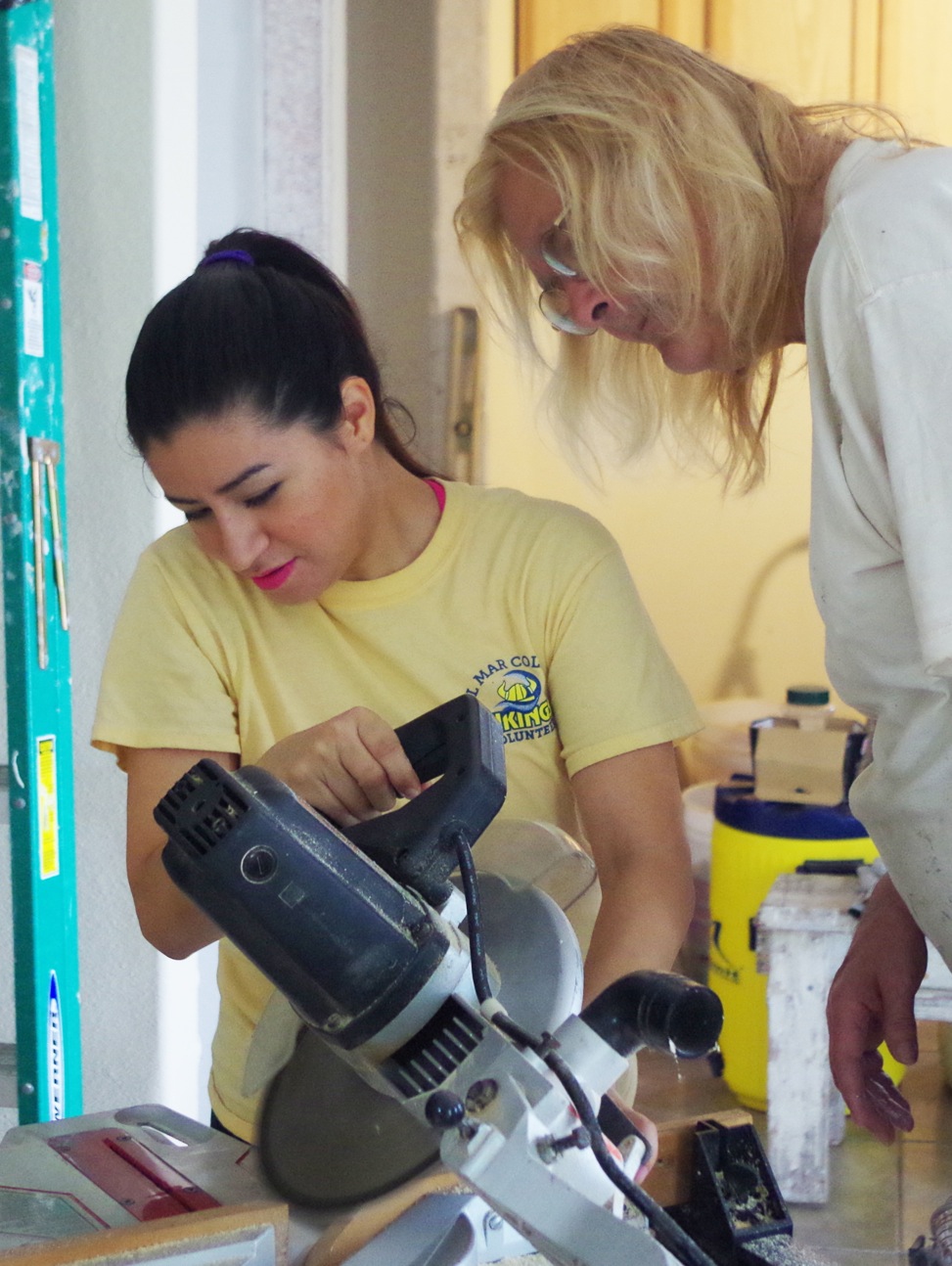 Erica Funes (left) gets help from Mari Randolph on how to properly use a miter saw on door trim pieces while helping build a Habitat for Humanity house.

Eighteen Del Mar College students and faculty from the Viking Volunteers program turned out early April 19 to help make the Habitat for Humanity vision of “a world where everyone has a decent place to live” a reality for a Maria Martinez and her grandson, Eric.

Martinez lost her previous residence when a drunken driver crashed her car into the Martinez home, taking out the kitchen and dinning room. Although no one was injured during the accident, Martinez found herself stuck between an insurance company and a landlord and neither was willing to pay for repairs to the home. For months, Martinez lived in a house wrapped in a tarp. Eventually, she was forced to move into an apartment with her grandson, Eric. Martinez was awarded custody of Eric after his 18-year-old mother passed away.

“Through all this, I believe God was working in our lives,” Martinez said.

Martinez read a Habitat for Humanity ad in the Caller Times and submitted an application.

“When I completed the application, I just knew I was going to be accepted. It was as if the application was written for me. I met all the requirements. I mean every one of them!” Martinez said. 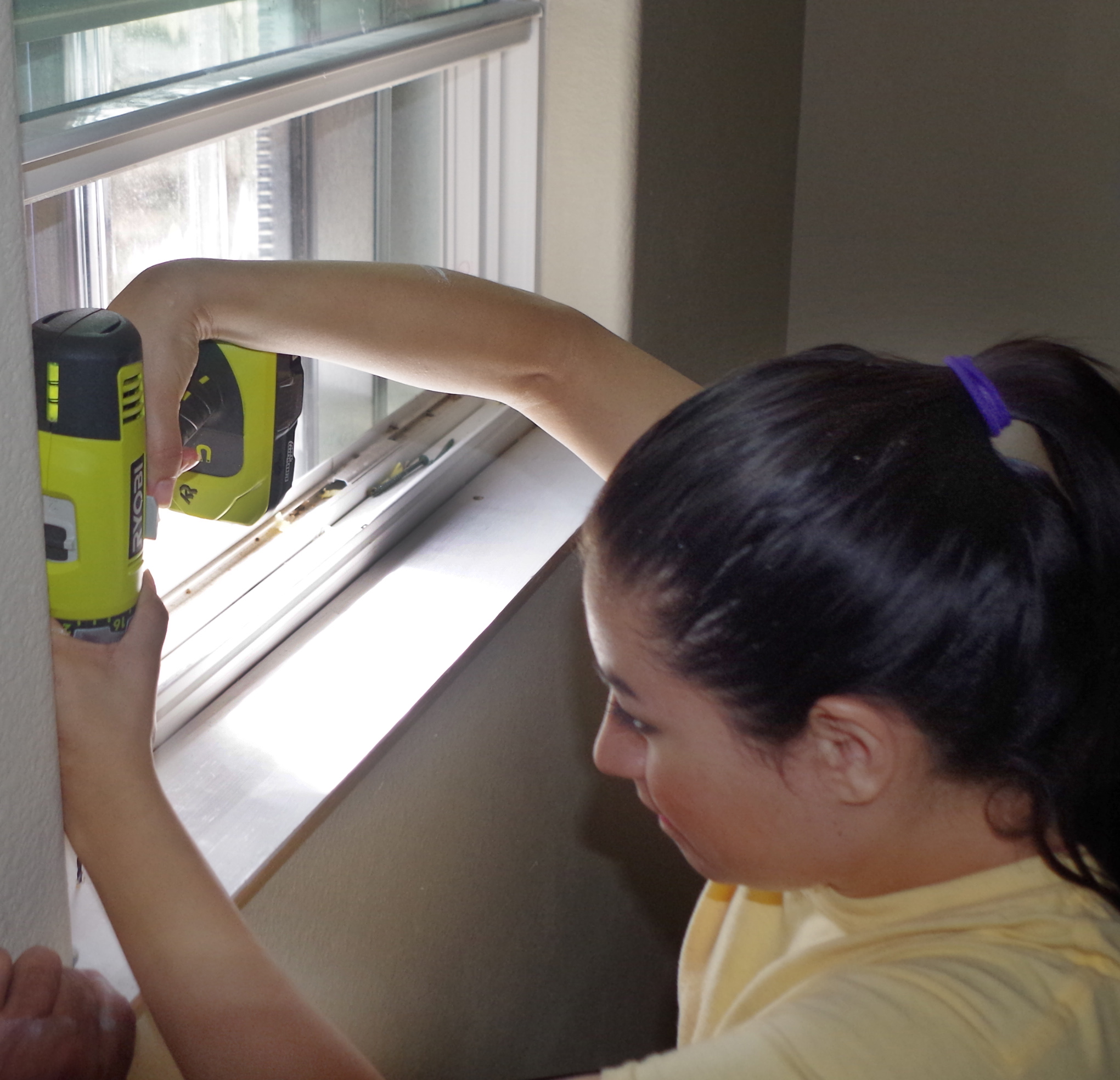 Construction on her home began just over a year ago. As a single mother, Martinez was required to invest 300 hours of “sweat equity” in the construction of her home. She met that requirement within six months and kept right on going a year and a half later. Martinez vows to continue her volunteering indefinitely.  When completed, Martinez will be the 47th family in the Corpus Christi area to receive a Habitat for Humanity home.

With the sun shinning, birds chirping and a perfect 74 degrees in downtown Corpus Christi on April 19 DMC students, guided by seasoned carpenters and craftsman, were tasked with measuring and cutting baseboards and window and door trim pieces. They primed and painted each piece and set them out to dry in the sun. Students also custom built and installed windowsills and built closet shelving systems.

These students are not volunteers for this single project. They are members of a school program whose primary function is volunteering.

“(We are) glad to have them,” said Mari Randolph, who has been volunteering with Habitat for Humanity for over 20 years.

“The main thing about coming in and doing a project like this is they are exposed to a community need.  They are also exposed to volunteering on a project and actually having fun with it,” Randolph said.

“I came out today because someone said something about free tacos,” joked Maria Perez, a sociology major at DMC.

“We acknowledge all the blessings we have so we pay it forward,” said Perez, who was there with her daughter, Amanda, applying primer to baseboards. 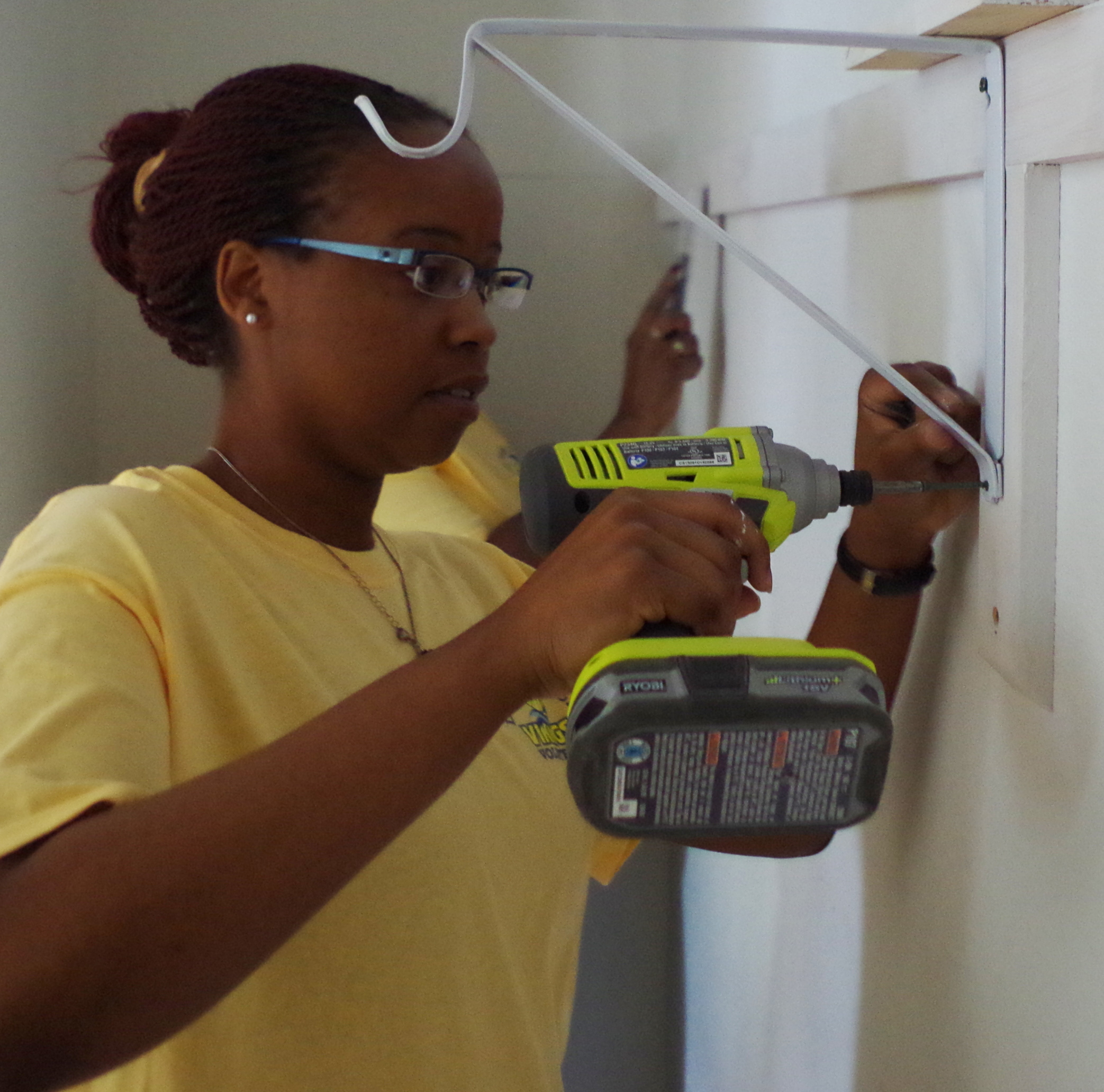 “The first reason why I started volunteering is because I have been in the position where I needed help and I benefited from it a lot from it,” Mugabe said. “I feel so accomplished. It is so easy to get wrapped up in your own life. It just feels so good to do something nice for someone else.

“I want to give back to a community that has profoundly helped me get my education,” he said. “It is a struggle out there. I don’t want to be like that. I struggled, but you know what, there are good people out there and I want to be part of those good people.”

For an organization that lives or dies by its volunteer corps, “every volunteer is a cherished individual because the work could not be done without them,” said Ada Davis, Habitat for Humanity volunteers coordinator. “(Viking Volunteers) are wonderful … a Godsend.”

Habitat homes are not free to the homeowner, as many might believe. According to the Habitat for Humanity website, prospective homeowners must meet certain qualifications. They must be citizens or legal residents, prove steady income within minimum and maximum limits, have good credit, and maintain a savings account over a specified time period. They must also invest “sweat-equity” hours in building their home and others, make an affordable down payment and timely mortgage payments and attend homeowner education classes.