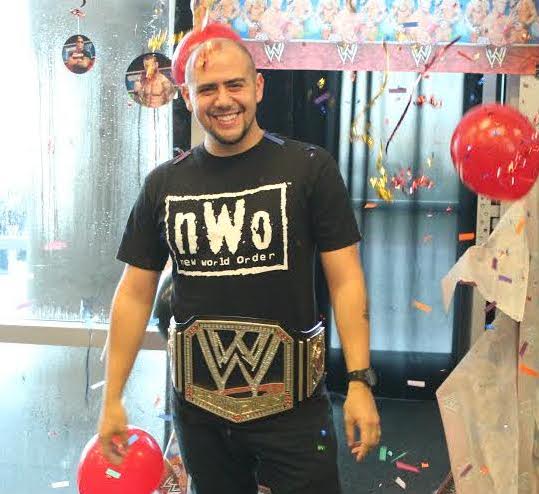 With its 10-year anniversary just around the corner, SMG-managed American Bank Center knew it had to do something big to celebrate. Since 2004, WWE events have continued to draw large crowds of loyal fans. On Tuesday, July 29, the American Bank Center chose the 100,000th to walk through the doors to win a special prize package. This package included ticket upgrades the day of the event, a backstage meet and greet with a WWE Superstar, WWE merchandise, a free six-month WWE network subscription, $100 food and drink voucher for the evening and four tickets to all WWE shows in Corpus Christi in 2015, including four front-row seats to WWE Raw scheduled for Jan. 5.

The WWE event was chosen as the avenue to celebrate American Bank Center’s 10 years of success because of the loyal fan base that surrounds the sport. “We’re coming up on our 10th said Eric Jaramillo, director of marketing. “When we first started WWE here we were averaging once a year. Now we’re averaging three (events) a year.”

Jaramillo and Marketing and Media Relations Manager Kristen Biley said the prize package was also a way to thank their loyal fans and patrons.

“What I see in every WWE event are these massive fans,” Biley said. “These fans are the best I’ve seen, they’re so dedicated. We wish we could’ve given (the prize) to everyone but ultimately it’s going to be that one dedicated fan.”

As the ABC staff and fans eager to see who won the coveted prize stood around, excitement began to grow.

Not too long after opening the doors for the event, the 100,000th unsuspectingly walked through the doors and into a night he’ll never forget. With faintly rose-colored cheeks, Trevino smiled through his nerves and excitement for a few photos against the backdrop ABC provided. Unaware of what the package contained, Trevino was still all smiles while walking back to the press conference room.

Trevino and girlfriend Selena Belcher were awestruck while witnessing the wrestlers and performers backstage getting ready for the big event. While Trevino knew each wrestler by name, Belcher nodded and smiled along. New to this sport, Belcher is still learning more each day with the help of her avid-wrestling-fan of a boyfriend.

“I’m dragging her into it,” Trevino said with a laugh. “I just love this business and all the characters. I’d rather see them talk than wrestle sometimes. They have skills.”

As Real American Jack Swagger and Diva Emma walked in, Trevino’s face lit up even more.

“I heard you pushed a little kid outta the way,” Jack Swagger joked as he shook hands with Trevino and Belcher.

As Jack Swagger and Emma finished up the meet and greet with a couple of autographs, they talked about the excitement of making a fan’s dreams come true.

“This is my favorite part,” Swagger said.

“I was just thinking, ‘Damn! I wish that was me when I was younger!’ ” Emma said. “I can only imagine what you’re feeling right now, must be pretty good.”

The tickets Trevino received for the next battle happen to fall on his birthday next year. When asked whom he’d be sharing the prize with he shrugged and smirked, still awestruck at everything happening around him.

One thought on “Swag and Swagger — wrestling fan gets ultimate prize”