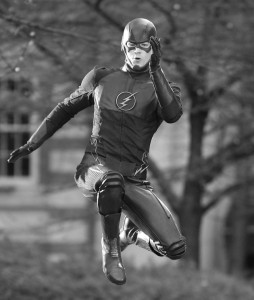 Grant Gustin speeds his way as DC Comics’ scarlet speedster “The Flash” as it makes its television debut on The CW. Also starring is Danielle Panabaker, Candice Patton, Carlos Valdes, Rick Costnett, Jesse L. Martin, and Tom Cavanagh. When the show was first announced people were skeptical about Gustin bringing the fastest man alive on screen because of his role on “Glee.” The show premiered on Oct. 7 and had the highest ratings for The CW since “The Vampire Diaries” in 2009. Only few episodes into the first season and the show is already going strong in the ratings.

Barry Allen (Gustin) works for the Central City Police Department as a crime scene investigator but he has a task of his own after witnessing his mother’s murder by a strange “speeding light.” His biological father is wrongfully convicted of the crime and is taken in by Detective Joe West (Martin) and his daughter (Patton). S.T.A.R. Labs runs a test on a particle accelerator that goes wrong and causes Barry to get struck by lightning, putting him in a coma for nine months. When Barry wakes up he discovers that the lightning has given him the ability to run at lightning fast speeds and in special cases can slow down time to help give him an edge. Barry isn’t alone as other humans have been caught in the particle accelerator’s blast giving them superpowers of their own. With the help of Cisco (Valdes), Dr. Caitlin Snow (Panabaker) and Dr. Harrison Wells (Cavanagh), Barry vows to track down these “metahumans” who threaten Central City and bring them to justice.

Gustin nails it as both Barry Allen and The Flash as he uses his mind in many situations to figure out what these metahumans are capable of and makes the character his own. Viewers do care about the side characters that can go wrong if not handled right but with the direction and management the show has gives justice to the people fighting alongside Barry. Panabaker does a great job in the show. Her and Valdes’ characters get a backstory in the third episode that gives them depth and makes you feel for them. Cavanagh also does a great job as his character takes a huge interest in Barry and as the show progresses will explore more of it. The show’s pacing is well done as you have your funny moments, talking moments, and Flash action that makes the show balanced for its hour that it’s on. One minor nitpick the show has is that some of the villains revealed so far have been underdeveloped and underwhelming at times and not that memorable. These are minor pitfalls as the show is just starting up and learning the ropes. 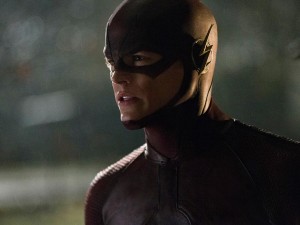 On the upcoming eighth episode the series will crossover into the third season of “Arrow,” DC’s other hit show on The CW where Gustin will star alongside Stephen Amell in each other’s shows and is said to be one of the most highly anticipated episodes for both series. This is going to be an exciting year for DC as this show is worth catching live on the CW.

With Marvel taking the reign for movies this year, DC is proving with its TV shows that it is still in the game and not out for the count.