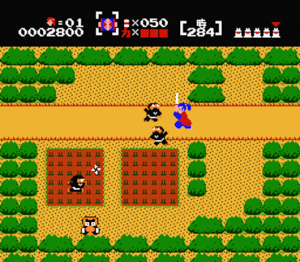 Originally released in 1986, “The Mysterious Murasame Castle” takes place in the Edo Japan era, where a blue-haired samurai named Takamaru must eradicate an alien creature from Murasame Castle and defeat four castle lords.

“Murasame Castle” is a top-down view game running on the original “Legend of Zelda” engine. It focuses more on combat rather than solving puzzles and exploration. Different enemies spawn in levels, making it less repetitive.  Like “Zelda”, the same music is played outdoors but changes while indoors.

Players start off with a default sword and shurikens (known as ninja stars). The sword is mainly used for close combat and can deflect incoming attacks from enemies, while shurikens are used in mid-range attacks. Like Link from “Legend of Zelda”, Takumaru can slash enemies from different directions.

While Takumaru comes equipped with his sword and shurikens, other items are usable as well. He can throw fireballs or windmill swords and zap away enemies with lightning bolts.

There are items that can help the player, too. For example, the invisibility technique turns Takamura invisible, capable of avoiding enemy attacks. He can also wear blue sandals to walk over water or red sandals to increase his speed.

Its game difficulty is geared toward people who are already gamers. Inexperienced players may have difficulty.

Waves upon waves of enemies appear on screen through out the game and as mentioned before, they spawn in the same spot and do exactly the same thing. I almost forgot to mention how Takumaru starts out with three hearts, making the game even more difficult.

I had a blast playing “The Mysterious Murasame Castle” for the first time. It brought me back to golden years of Nintendo Entertainment System games.The game may be “Legend of Zelda” meets samurai, but it is still enjoyable without solving puzzles or doing much exploration. I highly recommend “Murasame Castle” to gamers looking for a challenging game.