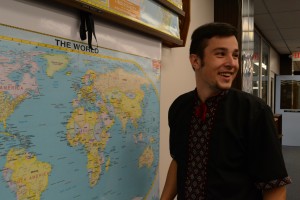 While political events and wars erupt worldwide, appearing on news and Internet sites, most college students go about their day-to-day lives, unaffected. Events in Ukraine, however, affect a Del Mar student, Viktor Glynyanyy, a political science major, and his family, as their concerns extend to their homeland.

Glynyanyy stays in contact with family in Kiev, Ukraine, remaining up-to-date with Ukraine’s events through them as well as reliable sources.

Over the past two decades, Ukraine and Russia have disagreed over land ownership.

“Ukraine has a long history of being under somebody,” Glynyanyy said.

After decades of fighting, Ukraine became its own country.

The previous president of Ukraine, Viktor Yanukovych, was impeached in February for stealing money and pushing for a continued ties with Russia. In March, after the president’s impeachment, Russia annexed Crimea, an important port region in Ukraine, according to BBC.com. In May, President Petro Poroshenko was elected in place of Yanukovych and is more concerned with Ukraine as its own country, according to Glynyanyy.

“While I was in Ukraine, I would consider myself a nationalist,” Glynyanyy said.

In Ukraine, money seems to have the biggest effect on Glynyanyy’s family. Prices have increased, so inflation takes its toll. One American dollar is equal to almost 13 hryvnia now, according to Glynyanyy. 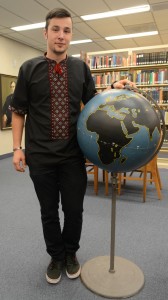 “When I left, it was eight hryvnia to the dollar,” Glynyanyy said.

The bad economy in Ukraine is frustrating to Glynyanyy and his family, even here in America.

Most of Glynyanyy’s family lives either in Ukraine or the United States. Glynyanyy’s brother, however, lives in Vancouver, Canada. According to Glynyanyy, there are more opportunities available for him in Canada. Glynyanyy’s brother, Alex Glynianyi, arrived in America one-and-a-half years after the rest of his family, so their names were transliterated differently.

“The rules of transliteration change all the time, so even though we have the same last name, Alex’s is spelled differently,” said Glynyanyy. Glynyanyy’s brother works in Vancouver and plans on attending a university there.

As a Ukrainian, Glynyanyy appreciates a lot of what is found in the Constitution of Ukraine.

“What I like about the Ukraine Constitution is that it states Ukrainian as the official language,” Glynyanyy said.

According to legistlationonline.org, Article 10 declares the official language to be Ukrainian. Glynyanyy learned a number of languages during his schooling in his homeland including: Russian, Ukrainian, English and some German.

Glynyanyy visited Ukraine in 2012 and plans to visit family again.

“I do want to go back. I want to apply for citizenship, first,” Glynyanyy said. “It takes five years to gain citizenship if you have a green card.”

“I think there’s a lot of different ways to improve our lives. Construction of peaceful coexistence in the world is the first step toward that,” Glynyanyy said.