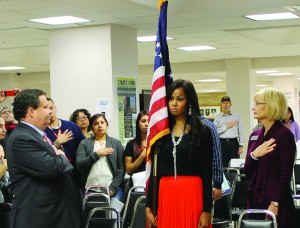 Del Mar College honored its veterans with a week’s worth of activities called Salute to Veterans Week. The events drew active duty service members and veterans from all branches, plus a United States congressman.

“Del Mar is taking the lead by providing facilities and services by creating a place for veterans to go and feel at home,” U.S. Rep. Blake Farenthold said during the grand opening of a new veterans center on East Campus on Nov. 10.

The grand opening for the veterans center took place in the Harvin Center. Nicholas Lopez, a Del Mar choir singer, sang the National Anthem. After the anthem, students held flags to represent each branch of the service.

“We are very proud to present the veterans center. We want the veterans to feel appreciated and have a place to call home away from home, a place where they can study and feel relaxed,” said Mark Escamilla, president of Del Mar College.

Other events during the week included a reading of names of fallen heroes, a luncheon for veterans and more.

The veterans who have served our country have been through a lot more then we think. On Nov. 13, guest speaker Andrew O’Brien, an Army veteran, came to Del Mar to share his story. O’Brien came to the White Library and talked to staff and veterans of Del Mar about his rough life experiences. O’Brien explained his difficult life and all the tragic things he had been through, and what led him to serve our country. 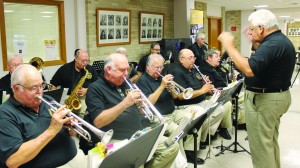 “When I was growing up, my mother was a prostitute, and the only person I had to call my family was my brother. He was my rock,” O’Brien said.

He said his mother would bring the clients home and would have sexual relations with them in front of him and his brother. When O’Brien was growing up he was constantly told that he couldn’t do anything that would benefit society.

When he graduated high school and got his GED, his brother had joined the Army.

“My brother was my role model. I wanted to follow in his footsteps. My mother was never a parent; my brother was all I had,” O’Brien said.

O’Brien went on to follow those footsteps as an Army truck driver. After serving he returned home with posttraumatic stress disorder, a disease that a lot of veterans can rel 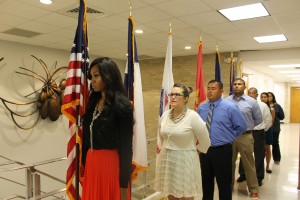 O’Brien opened up about his life to veterans and staff, to explain how much people go through when they serve. O’Brien’s series of unfortunate events led him to serve our country.

“I didn’t serve for any patriotic reason at the time, but after serving and finally getting over the disorder, I realized how proud I am of what I did for my country,” O’Brien said.

Salute to Veterans Week is a week that veterans get appreciation for what they have been through for us. It is a crucial week, a week where the deceased and living veterans get to feel loved and appreciated from Del Mar and society. Del Mar gratefully appreciates those who served for us, and Salute to Veterans Week will take place every year to remind us of those who risk their lives for our country, safety and freedom.