Forty years have passed since Lorne Michaels created the popular sketch comedy show “Saturday Night Live.” In its heyday, “SNL” was a Saturday night tradition in households all over the country.

The show’s 40th anniversary special aired on Feb. 15 and ran 3½ hours. Let me repeat, 3½ hours long. Besides the fact that the special was overloaded with stars old and new, sometimes it was a bit painful to watch.

It was apparent that there was no rehearsal whatsoever, which is understandable considering the amount of celebrities featured in the skits. But for the most part, no one really knew what was going on. 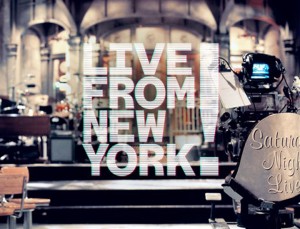 Eddie Murphy, who was a regular cast member in the 1980s, didn’t perform in a skit, but talked about his time on the show while cracking a few jokes. At the end of his time on stage he said, “We’ll be right back,” and nothing happened. An awkward lull filled the room and Murphy looked around, confused. “I said we’ll be right back…,” Murphy repeated before the show finally went to commercial. Awkward.

Many of the skits fell short, but some managed to get a good laugh. Will Ferrell reprised his role as Alex Trebek from the game show “Jeopardy!,” which always guarantees many laughs, as his impersonation is uncanny.

Molly Shannon made a quick appearance as Mary Katherine Gallagher and we all wished she had gotten her own full skit.

I think my favorite part was Steve Martin’s opening monologue. It was heartfelt, hilarious and classic, just like the comedian.

Overall, the anniversary special wasn’t all that special, but it had its moments.

Let’s us never forget Kanye West performing while lying on the ground and Melissa McCarthy paying homage to Chris Farley as his well-known character Matt Foley who “lives in a van down by the river.” It was a classic impression and one for the books.