Two recent security incidents have heightened fears and brought some criticism to Del Mar College about the way information is released to students and staff in an emergency.

In response to the situation, campus security was heightened and Corpus Christi Police Department officers were called in to investigate. The woman’s 11:20 a.m. class was canceled and at approximately 1:09 p.m., a DMC Alert was sent out to students and faculty members. The threat was classified as a “low level threat” by Kelly White, director of Environmental Health, Safety and Risk Management, at 1:30 p.m. Another alert was sent out at 4:42 p.m. informing students about the ongoing investigation and directing them to www.delmar.edu for more information. 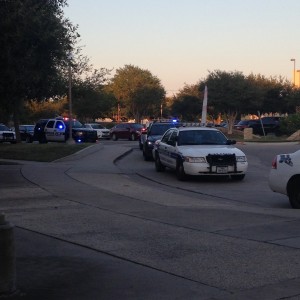 The man was later apprehended by the Corpus Christi Police Department at 5 p.m. off DMC campus.

“The threat on Oct. 1 was classified as low level because neither the target (the female student) or the person who threatened the woman were on campus,” White said. “The case would be considered a high level threat if the person in danger or the one causing the danger was on campus.”

A final alert was not sent out regarding the arrest of the man because DMC Alerts are used for on-campus emergencies, White said. Students and faculty were sent to the college’s social media and website for final information. White could not comment further on the incident because police are continuing to investigate.

The second security scare occurred on Oct. 5 and was discovered to be a false alarm within a few minutes. About 30 CCPD cars arrived on East Campus in response to a 911 call reporting a shooting on campus. Witnesses explained that it was not a shooter, but only a truck backfiring on the corner of Ayers and Baldwin. Police searched the Memorial Classroom building as a precaution and found nothing. The college did not send out a DMC Alert regarding the incident because it was immediately determined to be a false alarm, White said. 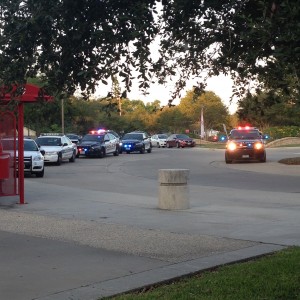 Police officers arrive on Del Mar College’s East Campus in response to a 911 call of shots being fired on site.

According to White, there are several steps the college has to go through when a threat occurs on campus. In the Oct. 1 incident Del Mar President Mark Escamilla, the Provost’s Office, the college attorney and the security department joined together to decide how and when to send out the alert.

The DMC Alert at 1:09 p.m. stated that the college was responding to a threat made against a student and East Campus, and informed students that security on campus had been increased. The alert at 4:42 p.m. said Del Mar and CCPD officials were continuing to investigate. Neither alert went into detail about the threat.

“I didn’t really know what was going on with either of the incidences,” said philosophy professor Alan Clark. “The good that came out of it though was that it made me think about the sources I use to receive DMC Alerts. It also made me think about safety in the classroom, on whether I should lock my door from now on, or what I would do in case of an emergency.”

According to White, when sending out DMC Alerts on Oct. 1, the college had to withhold some information from students because it was an ongoing investigation in which the CCPD was in search of the man who threatened the school.

Fears were heightened on Oct. 1 because of the mass shooting that occurred at an Oregon community college at the same time the DMC Alert went out regarding the East Campus scare.

“I received an email, a phone call and a text message,” student Jackie Vela said. “I know the college can’t disclose all information to the students, but I couldn’t help but feel worried.”

Others also said they would have felt safer had more details been offered.

“I got two emails from the college since my phone is not working,” student David Charba said. “I was well informed, but I still feel like they could have told the students a little bit more on what was going on.”

According to White, the DMC Alert text messages can be sent to more than 25,000 people in the college’s database in less than a minute. He urged students and staff to visit www.delmar.edu/dmcalert to make sure their information is up-to-date to ensure they receive alerts.