Stir Fry 88 is located at La Palmera mall’s food court in between Thai Kitchen and Chik-Fil-A. It serves Oriental food for an affordable price.

Nothing works up an appetite — or leaves you feeling broke — like a long day of shopping at the mall. So when we found ourselves at La Palmera on a slow Monday afternoon, drawn to the food court by smell alone, we couldn’t resist. And because it’s inexpensive, we knew it would be a perfect fit for Economic Crunch.

With vast variety of food options available, we decided to try out two restaurants’ interpretation of sesame chicken. The food court was nearly deserted so waiting wasn’t a problem. I tried Thai Kitchen’s sesame chicken.

The man behind the counter was very welcoming and offered me a sample before I decided to commit to an entire plate of food. I ordered the No. 1 combo, which includes a starch, either rice or noodles, and a protein.

I couldn’t choose whether I wanted the noodles or fried rice so I asked the man what he thought. He concluded I needed to try both. For no extra charge, he gave me half rice and half noodles.

For the protein, I ordered the sesame chicken that was drenched with sauce. To finish off my order, I ordered a large Sprite, bringing my total to $8.53. The price was even more exciting than having rice and noodles.

Managing Editor Cayce Berryman and I sat down to sample our food. With very low expectations, I wasn’t anticipating spectacular food from a food court in the mall, but I tried the chicken first.

I couldn’t decide whether it was chicken or candy trying to disguise itself as chicken. The sauce was so sweet that my teeth started to hurt. It made my Sprite taste like a savory drink.

The noodles and rice were adequate but not overwhelmingly delightful, although it was pleasant to be able to sample both options. The best part about the meal was the quantity for the price. I got enough food to last me two meals. Granted, I wouldn’t want to have it twice.

I concluded that I could have made better food than what I received, but that was to be expected. My expectations were met, but not surpassed. The food court is convenient for food on-the-go while shopping. I would have preferred to have my chicken actually taste like chicken, but it is mall food.

If I were shopping at La Palmera, I would probably eat at the food court again solely based on accessibility and the array of options in a single place. If you are on a budget or shopping around the mall, the food court is a good place to catch a bite. 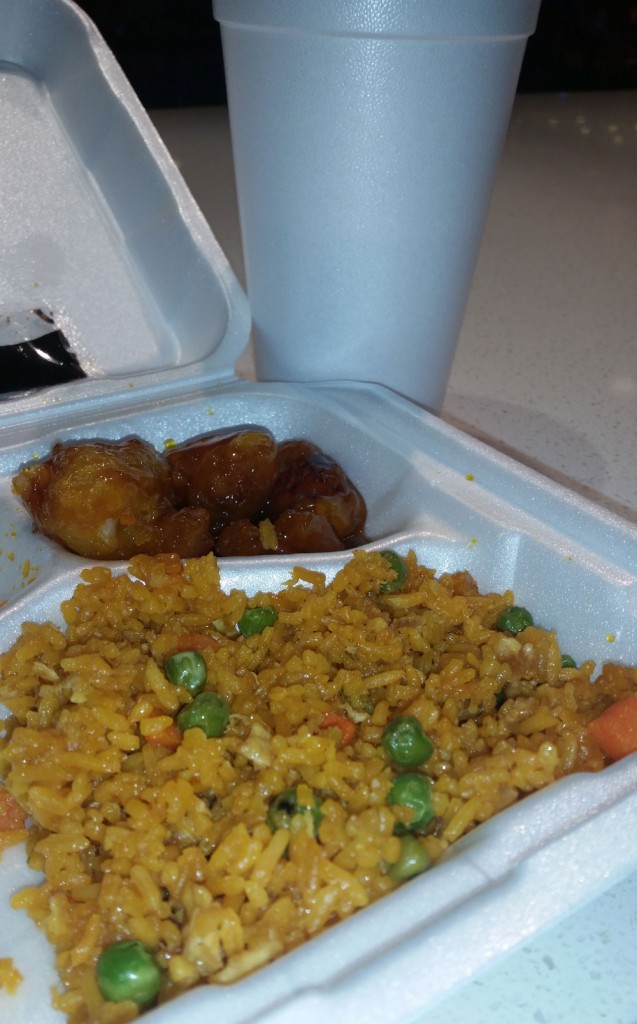 Sesame chicken served with fried rice, an eggroll and a medium drink at Stir Fry 88 costs $9.60.

Mall food isn’t always the preferred choice for lunch or dinner, but it’s not necessarily a bad one. The number of selections has increased, but the readily available food of choice is Oriental. If you have been to the mall’s food court, you have seen three similar “restaurants,” but they aren’t exactly the same.

I went to the food court with Foghorn Editor Samantha Douty, and while she tried Thai Kitchen, I headed to Stir Fry 88, where I got sesame chicken, fried rice, an eggroll and a medium soda for $9.60. I expected more sesame chicken for the price, but I don’t buy Oriental food often enough to remember how large servings are.

Usually, I’ll eat fried rice with soy sauce, but I’m an advocate for trying things before seasoning them so I did, and I eagerly set aside the soy sauce. The flavor was great; however, it was easy to recognize the stiffness of bulk-cooked rice that set out in the air for a good couple of hours. I didn’t mind, but it was obvious.

The eggroll wasn’t fantastic, although it wasn’t too different from most eggrolls I’ve had. It was a bit overcooked so the outside was dark, and I didn’t get to enjoy it as much as I would have liked. Eggrolls are supposed to be the french fry to my main course, but it didn’t quite meet that standard.

I knew the sesame chicken would taste good because I had a sample before I ordered. That’s one thing I can appreciate about the food court is the ability to try food without feeling obligated to buy it. The sesame chicken didn’t have sesame seeds on it, which is one of the best parts, but it tasted good. It wasn’t overbearingly sweet, and it had a nice crunch to it so I expect it was recently cooked, and that’s something you can sink your teeth into. Some pieces of chicken had more crust than I would have liked but I love sesame chicken, and it’s always my first choice when going to an Oriental restaurant.

At Stir Fry 88, it’s an affordable choice and although I initially thought I didn’t have enough, it took all I had to finish the majority of it before I had to turn away from the rest.