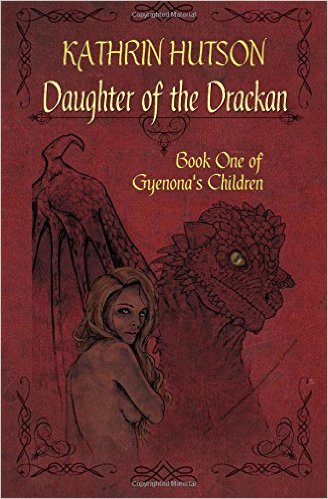 “Daughter of the Drackan,” the recently released novel and first of a two-book series, is an astounding introduction of a dark world experienced by a woman who demands to rule her own life. The dark fantasy debuted author Kathrin Hutson well, representing the population of well-written literature for self-published authors.

Keelin is born human but raised by drackans, beasts that despise mankind, and she is the only one who can ensure destruction or redemption of both races. Although she experiences strange blackouts and wakes in blood, her drackans cannot tell her why they occur or what happens when she disappears. Desperate to find answers, Keelin faces those she has been raised to hate. While her journey into the humans’ world brings her closer to a stranger who somehow commands her every move, it also threatens her loyalty to drackans and the humans she meets along the way.

“Daughter of the Drackan” is Book One of Gyenona’s Children, and the second book is set for release in spring 2016.

Keelin is not a typical main character. Most authors write with the intention of encouraging readers to fall in love with their characters and either hate or empathize with the villains. Hutson managed to let Keelin create herself, and the result was fantastic. Keelin is a character who grows on you. She is rough, proud and she refuses to take “no” for an answer or allow anything in the way of reaching her goal. It’s uncommon to create characters strong enough to resemble people that are equally as flawed as we are, yet hold such a high status in the realm of “heroes.” In fact, Keelin isn’t quite a hero yet. In Book One, she has a goal for herself, and she does everything in her power to reach that goal.

One part of her character that makes this book such an enjoyable read is her experience with humans. There are many things we don’t notice about human nature, but Keelin is experiencing it for the first time and we get to experience it with her. Smiling, movement, sex and even talking are all introduced in a new way, making the human world more interesting as we view it and read it through her eyes. Though we are reading of a dark world, the new experiences provide plenty of laughter.

The world is vivid and alive, but the main character makes the story something worth delving into, and her goal makes her a character to root for. The world opens up slowly, and it’s as vivid and memorable as the world we see for ourselves.

“Daughter of the Drackan” is Book One of Gyenona’s Children, and the second book is set for release in spring 2016. It is worth reading and anticipating the next installment. It’s worth getting lost in the world and meeting a new person you end up hating only because she doesn’t exist in real life.