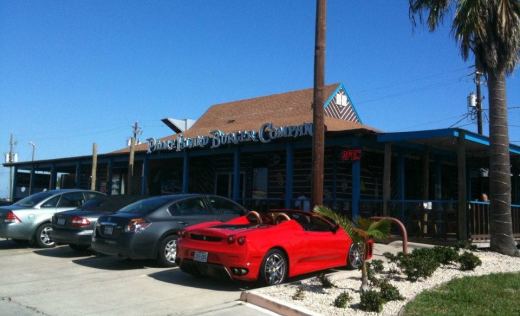 Right about now, you may be waiting to soak up the sun on the beach. But what’s Spring Break without a place to sit down and have a drink and a nice meal right near the beach? The Foghorn staff set out to Padre Island Burger Co., located on 14414 State Highway 361 on Padre Island, to see if their burgers and non-burger items are worth trying while taking a break from the beach. 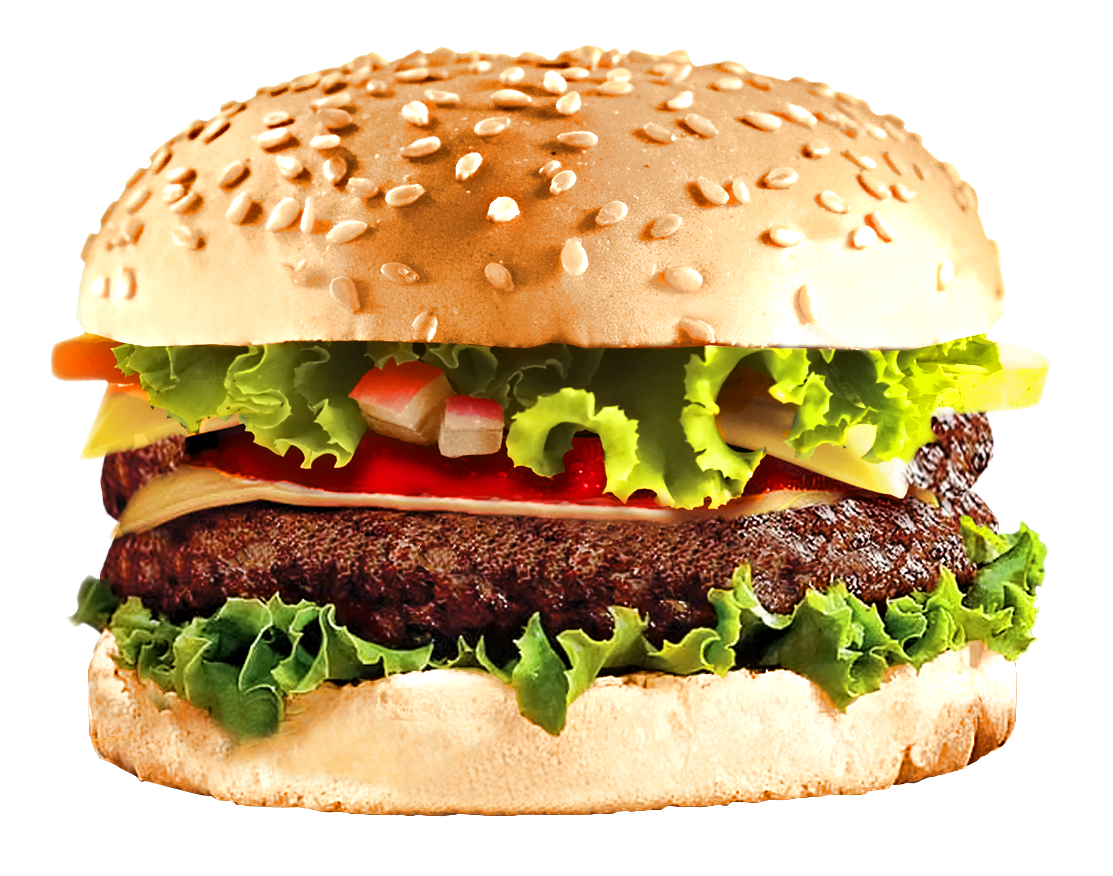 I decided to head out to Padre Island Burger Co. for lunch on a Sunday afternoon. This place has been known as the go-to place for burgers out on the island. The parking lot is shared between the Stripes and a local souvenir shop, making parking tough to nd at times. As I entered the restaurant, the area where you place your or- der was directly in front of me and the items on the menu were writ- ten on a chalkboard.

I ordered the Dr. Padre Burger and a side of french fries to go along with it. They give you a choice of drink for either a fountain drink for $3 or anything from the

bar that varies on what you want. I chose the soft drink and filled my cup with unsweetened ice tea and took a seat at two round tall tables that had pictures of people catching all kinds of fish on the beach. 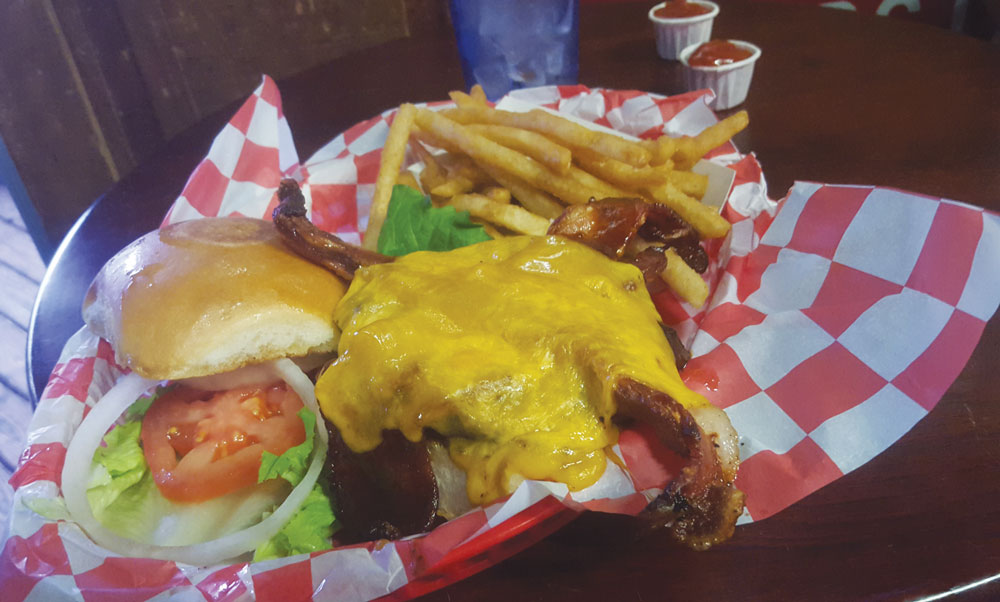 As I waited for my food to come out I took a moment to take a look around the restaurant. It has a small dining area with a few booths, tables, a bar and an outdoor patio that gives you the option to eat outside. Since it was windy and gloomy outside, I decided it was best to eat inside. I looked at the doorway in front of us as it had many bottle caps from beers and sodas all lined up around it. The place was packed as it saw a good lunch crowd, and of all days for it to be packed is on a Sunday.

The buzzer that I was handed after I ordered went off, alerting me it was time to get my food. I looked and the burger came with bacon on it, Dr. Padre sauce and a whole lot of cheese on the meat. They also put the veggies on the side, which is always a plus because I usually only add the lettuce. I wasted no time and bit into my burger, and it tasted really good. The sauce was sweet and complemented the cheese, bacon, lettuce and sourdough bun perfectly. For being a place that boasts about its burgers it certainly hit the mark. The fries were also really good too and they give you a good amount.

I was real satisfied with my experience with Padre Island Burger Co. and if you’re looking for a great burger place to eat this Spring Break, this is it.

While Padre Island Burger Co. is obviously a burger place, I wanted to get something else on the menu to see if they had any hidden gems.

The restaurant atmosphere was relaxed, casual and something that you would expect on the beach. The bar did take up quite a bit of space, but the restaurant was family friendly; most of the customers there were families with young children. The restaurant also had a small deck outside if you prefer to eat outside, but it’s just looking into the parking lot so there isn’t really much of a view. Altogether the restaurant is really friendly to any crowd. 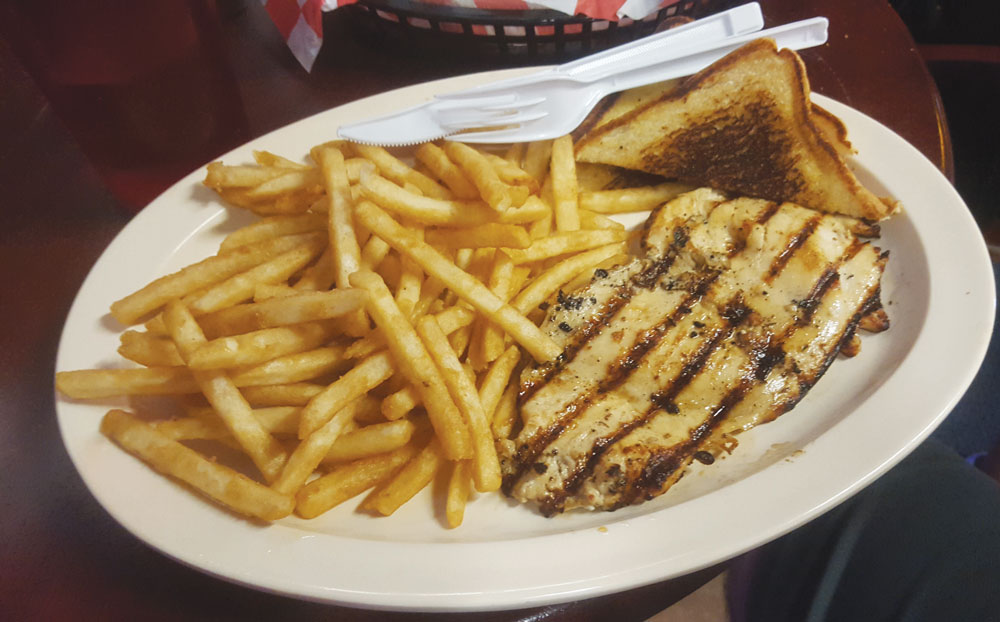 Blackened grilled chicken is served fresh with a double order of french fries (usually comes with squash) and toast, which is one of the many non-burger dishes.

I decided to get a drink and the blackened grilled chicken because I did not really want anything that was fried or anything too heavy. I guess they don’t get very many orders for items other than burgers because my chicken took over 30 minutes before I received it. It wouldn’t have been all that frustrating except that I saw multiple families of four who ordered after me getting their food before I got my grilled chicken. I felt a little bad going up to the register twice to ask about my food,

but I honestly was a little frustrated.

When I did finally receive my food I was fairly impressed. The chicken was cooked properly and was seasoned well so it had a good flavor. Usually they serve the chicken with some squash to dress up the chicken a little bit and a side, but I did not want any squash so instead I replaced it with some extra fries.

The fries were very good as well; they were crispy but not burnt and probably the best thing I ate there. My advice to you if you choose to go to Padre Island Burger Co. would be to get a burger. The chicken was good, but it took too long for me to receive it. There were a lot of things I liked about the restaurant and I probably will be going back again.

The only difference is that the next time I go, I definitely will be getting a burger.