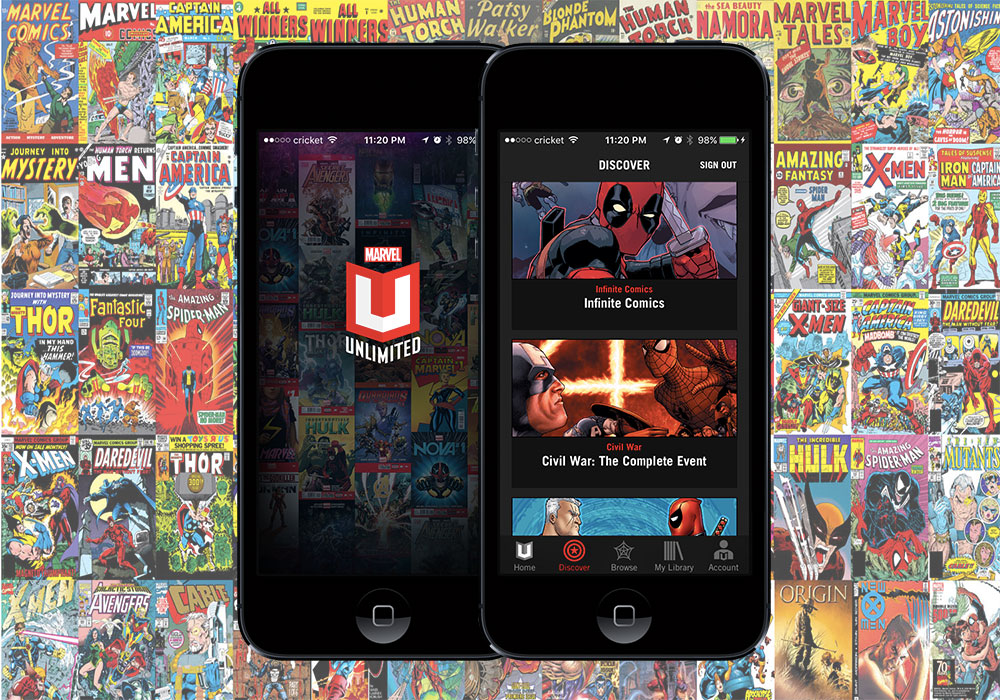 Some people like to spend their Spring Break at the beach, traveling or even just staying at home watching Netflix. What about a comic binge? Ever heard of that?

Couldn’t there be a site that would allow people unlimited access to their favorite comics at the click of a button? There is, and it is called Marvel Unlimited.

Marvel has created its own comic version of Net ix. It is not something brand new but has existed since 2007.

Marvel Unlimited is available online or via app and users can start off paying $9.99/month and get to read all of their favorite comics from the 17,000 to choose from.

If a user decides to not want to pay monthly, he or she can pay $65 annually. It is a lot cheaper than paying monthly, but I started o paying monthly in case I decide to change my mind about the app.

If a user is a super fan of Marvel Unlimited, he or she can upgrade and become an Unlimited Plus member. An Unlimited Plus member pays $99/year to get offers like becoming an exclusive member to con events, a 15 percent discount at the Marvel Digital Comic Shop, 10 percent off every day at MarvelStore.com and a collectible plus member kit every other month.

Sounds like a dream come true? Well, it is and I will tell you why.

Having a subscription changes how you read comics, just like having Netflix is so much easier than rummaging through those old DVDs.

Consider the economics: When you’re paying by the issue, you’ll be conservative in what you read, tend toward the most-hyped comics, stick with what you know. When you’ve got a subscription, you can try comics with impunity: Pick up that quirky spinoff from the latest crossover, finish that crossover you gave up on and read a legendary run from the past.

Since signing up for Marvel Unlimited, I’ve caught up on my favorite Ghost Rider comics, checked out the Deadpool comics I could not purchase last year, Squadron Supreme, some of the latest comics they had for the month and more importantly I got to start from the beginning on how Civil War started. From the first Spider-Man issue in 1999 to Avengers: The First Initiative in 2007.

I do not have to find each comic on my own like I would if I were looking for the comics in print, but every comic I’d ever need is there for me in my hand. This excites me because I can reread the event before the new movie “Captain America: Civil War” comes out in May.

If I were paying by issue like I used to, I’d never read as much as I did.

Just 10 bucks a month is cheaper than buying three comics a month (single issues range from $1.99 to $4.99). While it’s more expensive than Net ix ($8.99), it’s cheaper than buying an IMAX ticket on the weekend at Century 16 ($11.50). For those who have missed the boat, comics have emerged as a major new narrative form, and they’re experiencing a golden age akin to what’s happening on TV. With
the arrival of Jessica Jones, Daredevil, Ant-Man, Deadpool, X-Men Apocalypse and the rest of the Marvel Universe hitting the big screen, it’s only fair to say comics are once again becoming the biggest “it” since the revamp of the ’90s shows on Nickelodeon.

You’ll enjoy having an unlimited supply because Marvel Unlimited’s digital comics are perfect for a moment of quiet escapism, easier reading than a book, less obtrusive than the TV. It’s the best use I know of an iPad, any other mobile device even the laptop.

Not having a physical comic may discourage some people, but me, I’m skeptical of comics as an investment and I’m glad not to have to store a growing collection anymore.

The best part about Marvel Unlimited is that if I ever change my mind about it after I’ve mined the archives, I can always cancel the subscription.

So, take up the app or go online for Marvel Unlimited and don’t be like any other Spring Breaker. Binge on more than just movies and shows and step out on the adventurous side of the comic book world. You won’t regret it, but you might regret forgetting your iPad with all those unlimited comics to read while lying out at the beach.