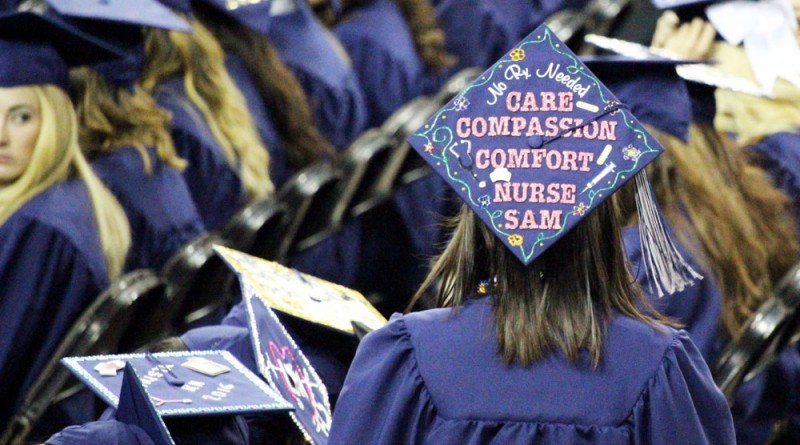 As she walked across the American Bank Center stage, Marissa Ramirez realized she was suddenly one step closer to her dream.

Ramirez, a criminal justice major, was one of more than 400 Del Mar College students to graduate on Aug. 19.

“My grandparents raised me and were an inspiration on getting ahead in life,” she said. “I’m hoping to be a lawyer and change the world in that way.”

Abigail Rosales’ path wasn’t always as clear, until one day in 2008 when her brother called her and said he was going to college.

“If he could, I could,” Rosales said. “I remember the day … it was raining. I piled my kids in the car and drove to Del Mar. I said, ‘Come on kids, I’m signing up for college.’”

Like many students, Rosales juggled multiple responsibilities while at Del Mar, but she stuck with it every semester.

Several hundred family members and friends attended the ceremony to celebrate the transition of their loved ones from student to graduate. The ceremony was held at the American Bank Center because of flood damage at Richardson Performance Hall.

“My boyfriend, Jack Olivo, took a long time to get here,” said Stephanie Torres, who sported a Del Mar shirt along with her infant daughter, Evy, to support Olivo. “But now we’re here and he even wants to go back. He did it all by himself, and of course, for us.”

Cody Reynolds, who majored in criminal justice, hopes to be a police officer.

“I think that with everything going on, there needed to be a few good ones and I think I could fit the bill,” Reynolds said. “It’s important to go (to college) to get a better job and more money, too. You can go back to the moment of walking the stage and being proud of yourself.”