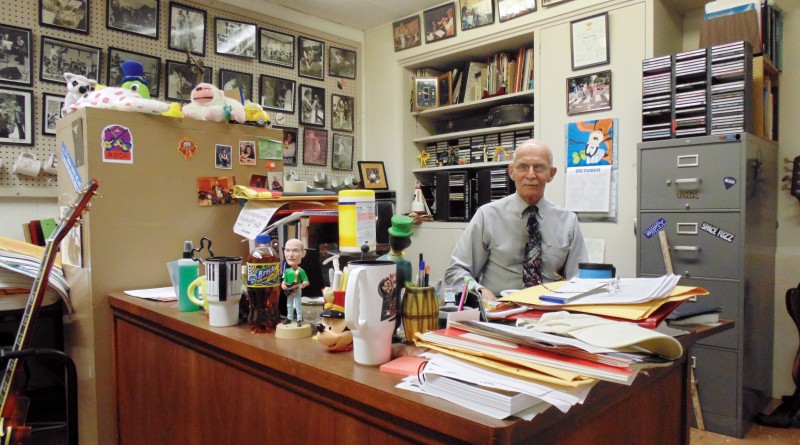 Professor David Irving has touched the lives of many during his time at Del Mar.

After 45 years of teaching at Del Mar College, music professor David Irving is going out on a high note.

“I chose to retire this year because I wanted to stop doing this while I still loved it, and while I could still do it,” said Irving, who plans to retire at the end of this semester. “I know several guys who kept going when they should have quit. They hated it, and lost the ability to do it.”

The Refugio native, who moved to Corpus Christi with his family as a child, didn’t always plan on a career in music. In the beginning, Irving wanted to be a centerfielder for the New York Yankees.

“Then sanity prevailed. I couldn’t catch, throw or pitch the ball but I was fun on the bench,” he said.

Irving soon realized that teaching music was his calling. He became a public school band director for nine years at Ingleside High School. The jazz band he taught won some jazz festivals and then he was invited to work part time at Del Mar College, which ended up becoming his full-time job.

Irving has touched the lives of many at Del Mar, including faculty and students.

“I was so shocked I had to put my trumpet down in class,” Frank Munoz, a veteran trumpet player for the Jazz Band, said upon hearing of Irving’s intent to retire, which was announced on the first day of class.

Even Melissa Sepuldeva, who has only known Irving since the spring semester of this year feels that it wasn’t enough time spent with him.

“I like his teaching style and manner. He is a loving director,” Sepuldeva said.

The initial reaction for some students and faculty in the Music Department was shock.

“He has become a fixture here, like the grandfather of the group,” said Yvonne Rodriguez, secretary of Music Building, who has been working with Irving for 10 years.

To the students, Irving is a great teacher and mentor, “and when we need him to be, a great friend,” said Michael Solis, a trombone player for the Jazz Band.

Irving’s office is decorated with lifetime achievements such as pictures with every guest musician to perform with the Del Mar Jazz Band, a collection of instruments in the corner and music sheet towers on his desk, coffee cups and SpongeBob pictures.

Despite all the memories, one thing always stands out, Irving said.

“The best experience is the interaction with the students,” he said.

“Music is supposed to be fun,” Irving said of all the time spend performing and conducting. “I don’t do anything that I don’t think isn’t fun. It’s what I live by now.”

Though he helped get the program to where it is today, Irving has no fears about handing over the reigns. “Living up to the legacy, I hope nobody tries to live up to whatever legacy I’ve owned up to, let them have their own.”

And what will Irving do with his newfound time after retiring?

“I expect to have lots of appointments with the sandman and will probably be traveling a lot more with my wife,” said Irving, 75. “I can’t stay young but I can stay immature.”