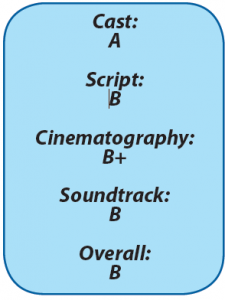 Ben Affleck’s first film of 2016 didn’t exactly please the masses. While his debut as Batman was lauded, the film was destroyed by critics. Affleck’s second attempt, “The Accountant,” didn’t exactly wow critics either, but it wasn’t a total failure. Directed by Gavin O’Connor and co-starring Anna Kendrick, Jon Bernthal and J.K. Simmons, this action-thriller about an autistic accountant who works with dangerous criminals is definitely one of the most interesting films of the year.

Affleck plays Christian Wolff, the eponymous accountant, who begins working for a prominent medical facility searching for money that has seemingly been stolen. As he begins his new job, flashes of Wolff’s rough past are shown, where he and his family had difficulty dealing with his autism. As the film sets up Wolff’s past, the Secretary of Treasury begins his hunt for Wolff, who they dub “The Accountant.” Meanwhile, a string of murders begins at the company who hired Wolff, leading Wolff to believe that a greater scheme is at hand.

While the film manages to keep its story entertaining throughout, its script isn’t a masterpiece. The plot of the film is far-fetched at times, but is nonetheless committed. While the end of the film took some shortcuts, it’s an overall enjoyable film that chooses to be a crowd pleaser instead of a deep art film. However, its moments of witty remarks and sweet moments are more than enjoyable. The cast is well-rounded and dedicated, with the many familiar faces putting on a great show.

The depiction of autism within the film is definitely thought provoking. While the film shows Affleck’s character overcoming his autism and becoming a math genius that can kick ass, the narrative surrounding his autism is troubling at times. His mother left his family because she couldn’t handle having an autistic child and his childhood was filled with his father training him how to fight and shoot.

For casual movie-going audiences the film is an enjoyable Friday night flick. But the silver lining of the film is how it gives autistic children their very own superhero.