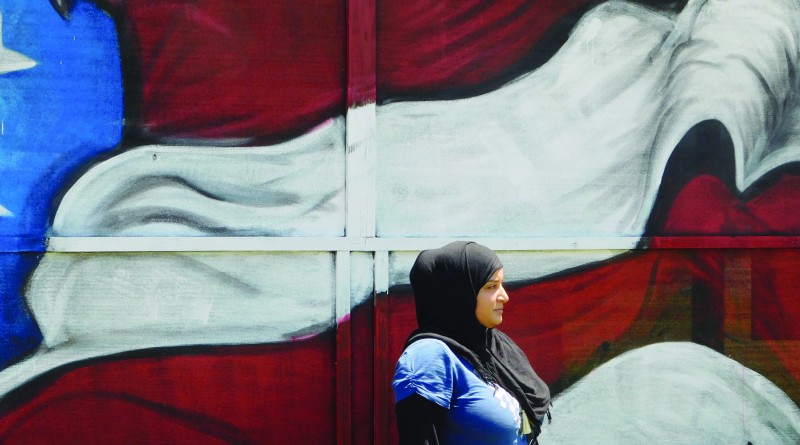 Sabah Mohammad remembers the Saturday morning vividly, abruptly awakened by the screams of her mother being viciously attacked.

The 20-year-old Collegiate student recalls the shock of her and her younger brother standing in the living room, seeing their mother being stabbed by their father. Her other siblings were standing in terror.

Mohammad saw blood gushing out her mother’s arm and ran to her father in an effort to stop the attack.

Mohammad screamed from the injury and let go.

Her father raced after her mother, who had rushed down the Westside apartment stairs to the parking lot looking for safety. He resumed his attack, dragging her and stabbing her in the foot and leg.

The police came in time to stop the attack, leaving Mohammad in shock trying to process what had just happened and her mother fighting for her life.

In the chaos and shock, paramedics arrived. Mohammad didn’t let go of her mother, resisting the aid as they pushed her — she knew this might be the last time she got to see her.

“I thought she wasn’t going to come back,” Mohammad said. “I held her in my arms, she couldn’t breathe and was trying to catch her breath.”

Although her mother was stabbed in the foot, leg, arm and stomach, among other places, she survived.

Mohammad never saw the horrors of that morning coming; Mohammad’s father was a certain discipliner but hadn’t been violent to the family in the past. Her father was sentenced to 15 years in prison.

Her mother stayed in the hospital for three days while she recovered from her wounds.

Six months before the attack, her father had lost his job for the first time and was suffering from depression. He attempted suicide several times.

Unable to pay for bills, the electricity at home shut off, leaving Mohammad to stay after school sometimes till 9 at night finishing homework.

Her father was too embarrassed to go to charities. Mohammad made it her responsibility to ask for help of public utilities at school. Collegiate Academic Counselor Vidal Anzaldua guided her through the different opportunities of food stamps and housing.

“Sabah kept saying what a wonderful country this is, they recognize that there’s people that need help and this country will help,” Anzaldua said.

Anzaldua helped Mohammad through the process of applying for food stamps and was amazed by her reaction of too much government help.

“He’s my hero, my whole family’s hero,” Mohammad said about Anzaldua. “Collegiate High School as a whole has shaped who I am. If it wasn’t for the school or the people in it, I wouldn’t be where I am.”

At age 11, Mohammad moved from the city of Peshawar in Pakistan to America. Her father had been living in Corpus Christi for 35 years before and decided to relocate the family to America for better education and facilities.

Peshawar was in the news after the The Army Public School and College was attacked by the Pakistani Taliban in 2014, leaving 141 people dead, including 132 schoolchildren.

Mohammad’s fiancé, who lives in Pakistan, attended the college before the attack and was relieved by his absence of the school.

Coming to America with no knowledge of the language, Mohammad was scared but now speaks English fluently.

While living in Corpus Christi, she was faced with pressure to change; she noticed the rivalries of Americanization. Having to adapt to new clothing was one of the greatest struggles she went through.

However, these American concepts of changing weren’t all bad pressures for Mohammad; she recognized that they were more positive than negative.

“The pressure for me was to be more open, more independent because in Pakistan women don’t get a lot of rights to be independent and be themselves,” Mohammad said.

The pressure of assimilation in America, however, didn’t stop the students and adults from stereotyping Muslim culture. She was faced with criticism and was often overlooked by the fact that she was just a simple human being, who was often associated with people who ruined the Islamic image.

“They would make comments like, ‘You’re a terrorist,’ and people thought I knew Osama bin Laden,” Mohammad said.

These viscous judgments led her to remove the traditional hijab that Muslim women wear around their heads.

“I was bullied from it a lot and I was scared,” Mohammad said.

In high school, she began to wear it again. After the domestic violence incident of her father, she wore it for comfort.

“I didn’t feel safe without him and my hijab makes me feel safer as a female, as a woman and I decided to start wearing it once again,” Mohammad said.

Mohammad grew up hearing students’ remarks of terrorism toward her due to her noticeable clothing, but also perceives social media for putting an opposing image of Muslims.

“Just because the media or anyone else who gives us a negative connotation or just the handful of people who have ruined the image that doesn’t mean we’re all the same, that all Muslims are the same,” Mohammad said.

According to Mohammad, it’s “ridiculous” for people to bear a dismissal perception of Muslims.

One of the places that brings her comfort and has a deep connection with is the Islamic Society of S Texas Mosque here in Corpus Christi.

According to Mohammed, it feels like home when at the mosque and she attends every Sunday for her and her siblings sake of not forgetting where they come from.

“We all trust each other,” she said, and even leaves her car doors unlocked while attending.

The surprising violence of her father hindered with school, her mental being, among many other obligations.

“We never expected my dad to do something like that, he was a little strict but we just thought that was him as a dad,” she said.

Yet she and her family hope to reunite with her father.

According to Mohammad, she does not hate her dad.

“Everything happens for a reason,” she said.

With graduation coming up for Collegiate, she misses her father and “it’s very hard” for her but she continues to stay strong with her support system.

“Where I am today and all the things I’ve been through and still been able to overcome them is because of who I am and where I come from,” Mohammad said.

Mohammad will be attending Texas A&M University-Corpus Christi next fall and hopes to earn a Ph.D. in sociology. Her main focus is children.

“I was going to major in nursing for my mom, but I decided to change all that when we went through this incident,” she said. “Social workers, the way they’ve helped me and changed my life, I hope to change other girls and families lives too.”

Mohammad hopes to work with CPS to help children and families as a social worker. She also plans on opening charities in America, Pakistan and branches in other countries to help empower children through education.

“In Pakistan I see a lot of kids on the street and they work to provide for their families and I hope to put those kids in school,” she said.

Mohammad’s mother, Rubeena Mohammad, has a hard time expressing her emotions to her children, but is grateful she has them to support her.

“Without her I don’t know what our family would do. She does everything for us and we really appreciate it,” Rubeena Mohammad said.

The struggle with domestic violence and discrimination Mohammad’s faced while living in America has brought her closer to seeking independence and appreciating the life she has. She sets an example for her siblings and others who are fighting though a hard time.

“Life is beautiful, the only thing I would change is for my dad to be with us. I’m hoping to build other people’s lives like many people have built mine and encourage others, and be an example,” she said.

Mohammad and her family are in a better state of mind, although they still continue to overcome the traumatic hardship they experienced less than two years ago.

“We know we have each other and that’s all that matters,” she said.