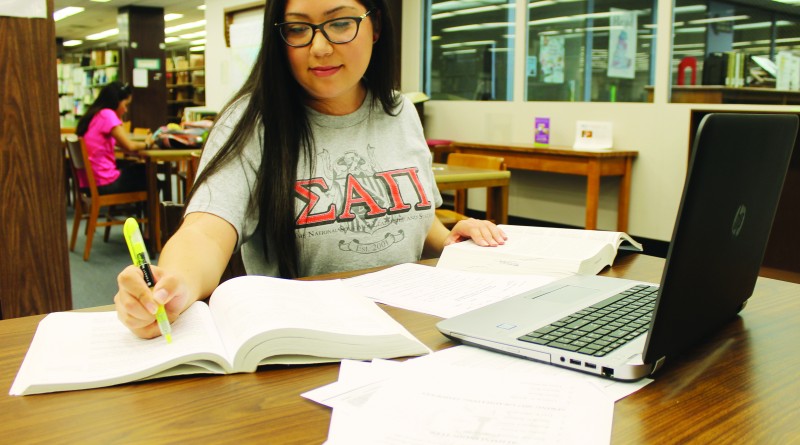 Many people think GED students would never be able to get into law school. Cristina Arriola is on her way to proving them wrong.

Named the Paralegal Student of the Year by Del Mar College, Arriola has come a long way to achieve this honor. At 28, she earned the Outstanding Academic Student award that is given out to one student from each department.

While Arriola has worked hard for this award, the journey has been anything but easy. She dropped out of high school in 10th grade as she didn’t see “the importance of being in school or getting a degree.”

This attitude stuck until Arriola was 18 and miscarried her child at 28 weeks because of an umbilical cord accident. She later got her son’s name, Dominic, tattooed on her collarbone.

While she didn’t go to school after that she began to think more about her future. She received another push toward getting an education just a year later when her older brother, Daniel, was diagnosed with cancer.

Her brother was one of the main reasons Arriola decided to go back to school as he stressed its importance.

“Danny motivated me to go back to school and made me promise that I would no matter what happened,” Arriola said. “He knew how important it was and wanted me to have a good life.”

Shortly after Arriola promised her brother that she would go to school, he passed away.

“I didn’t go to school right away, but I knew that I would,” she said.

Needing a change, at 23, Arriola moved to Chicago, where she “saw a little bit more of the world and saw that [she] could go do more and be more.”

While working in Chicago, she worked with people who had bachelor’s degrees and saw that she would really need to continue school to keep going with her life. She decided to move back home and focus on school.

“I came back in 2014 and went to Del Mar to get my GED. I successfully got it my first try and decided to stay at Del Mar and work toward a degree,” Arriola said. “However, I knew I was going to be at a disadvantage.”

Having not been in school since she was 17, Arriola came to Del Mar with little hopes.

“I didn’t even know what a flash drive was,” Arriola said, laughing. “It was 2014 for God’s sake and I had to relearn everything.”

“I got all A’s and one B my first semester and thought, ‘Hey, maybe I can keep doing this.’”

Inspired by seeing lawyers on TV as a kid, Arriola signed up as a paralegal student at Del Mar, even though she saw it as a pipe dream.

“It didn’t seem realistic that a GED student could ever make it as a lawyer or work toward that goal with any success.” However, Arriola said, ”my professors at Del Mar showed me that I could do well regardless of my past and go to law school one day.”

Gail Dorn, the director of the paralegal studies program, took notice of her determination.

“What set Cristina apart was her resolve to not only make a difference through her own actions, but to inspire others through knowledge not obfuscation,” Dorn said.

“Arriola is passionate about the paralegal profession and continuing her education to pursue a career where she can help people and make a difference” Dorn said. “She is a serious student yet keeps a sense of humor about herself and events she cannot control but desires to impact in a meaningful way.”

Arriola said she looks forward to making a difference.

“I really want to help people, fight injustice and make a difference in people’s lives. After Trump got elected, it really opened my eyes to what is going on in the world and why I want to become a lawyer. If a corrupt man like him can become president, who knows what else is happening that people know nothing about,” Arriola said.

Her focus will be on not only injustice and civil rights, but matters like health care.

“I recently went to Washington, D.C., to tell my representatives to not enact the American Health Care Act and not cut Medicaid programs. I personally told Congressman Blake Farenholdt that Medicaid had saved people in my family’s life and that my brother, Daniel, was unable to qualify for Medicaid because Texas is not an expansion state and wasn’t able to go to the doctor enough. If he had been insured, they might have been able to diagnose the cancer sooner and treat him, but it was too late.”

Arriola will be attending the University of Houston next fall and plans on majoring in political science before going to law school. She one day would also like to become a judge or do something to help the public.

“It’s still hard to believe that I got picked to be the Paralegal Student of the Year. I guess if a dropout GED student can win an outstanding student award then anyone can,” she said jokingly.