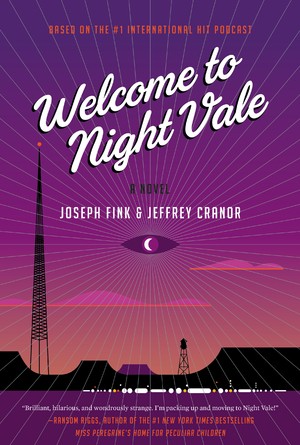 “Welcome to Night Vale” is a novel based on a podcast of the same name. The story is the first book written for the podcast by series creators Joseph Fink and Jeffrey Cranor. Unlike the previous books we reviewed, “Mostly Void, Partially Stars” and “The Great Glowing Coils of the Universe,” which were novelized transcripts of the first two seasons; “Welcome to Night Vale” is an original story following two new protagonists in their struggles in the titular town.

In Night Vale, the weird and supernatural are commonplace parts of life. The story follows Jackie Fierro, the perpetually 19-year-old proprietor of the Night Vale pawnshop, and Diane Crayton, the single mother of a teenage boy who inexplicably changes form at will. When Jackie’s mundane routine life is broken by a single note that reads only two words, King City, and Diane starts to see her son’s father, who left when he was born, walking around town looking exactly the same as when he left, their lives will intersect as they learn the connection between these two mysteries.

“Welcome to Night Vale” is a fun novel to read with the writing flow being very similar to the podcast from which it is based. Many main characters make an appearance in the novel alongside our new protagonists, with periodical appearances by original protagonist Cecil Palmer, and his boyfriend, Carlos the scientist. Although the book is very well written and actually wraps up a long-running storyline introduced in the podcast; it is this exact thing that may make it hard to pick up for newcomers, Continuity Lockout. The book, which takes place around the third season of the podcast, is filled with many entertaining and fun references to the podcast. Readers unfamiliar with the podcast will find that most of these jokes or references will go right over their head.

While “Welcome to Night Vale” is a very fun read with many interesting plot developments, I cannot recommend it to those unfamiliar with the podcast. That is not to imply that one cannot enjoy the book without it, but that their enjoyment will be enhanced by knowing the inside jokes involved in the story.