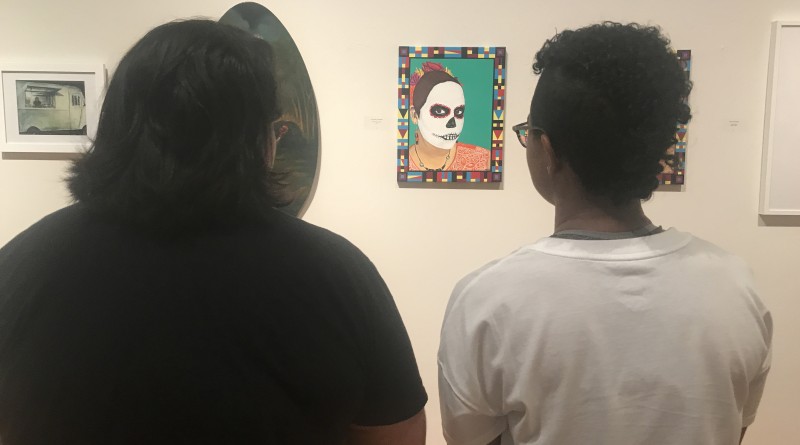 ‘My Casa is Your Casa’ features work from students

Located in the center of the Cain Art Gallery you will come upon a sculpture of two busts. One is looking up and one is looking down.

Each bust is overlaid with an antique print with a solemn expression. The face itself is painted in a style reminiscent of Dia de los Muertos, implementing the Mexican-American heritage of its creator, art professor Amorette Garza.

“I like the idea of finding objects somebody may have had before, and I try to bring a different life to it,” Garza said. Garza said she portrays a “we’re all the same underneath” concept in her sculptured work.

Garza’s piece, “Tchotchkes” (Two Heads), was one of several that highlighted work of the Mexican-American heritage as Del Mar Art hosted its opening reception for its exhibition of “Mexican-American Perspectives 2017: My Casa is Your Casa” on Sept. 15.

“I try to instill in my students that there’s work involved, and if it’s something you love to do, you still need to put that dedication and effort into it,” Garza said.

Garza’s piece was from an array of local and regional artists who displayed their work.

“I always joke with my mom and ask, ‘Was I born with a pencil in my hand?’” Zamora said. “I’ve been an artist all my life.”

Zamora focuses on the three basic elements in art; line, shape, and color. According to Zamora, her art reflects a true blend of her Mexican side along with her American side, which is apparent in her art.

“It’s amazing. I wouldn’t be able to do it [art] myself, so it inspires me to want to do it,” Gomez said.

Del Mar offers a program in Mexican-American studies that teaches students the history and experiences of Mexican-American men and women in the United States. Del Mar Art hopes to express the heritage through this exhibit, which will be held during Hispanic Heritage Month.

The exhibit will be open to the public through Dec. 5. Artist talks will be hosted weekly through Oct. 12, which will give Del Mar students an opportunity to witness the experiences of local artists firsthand.

A small group of peaceful animal rights protesters stood outside the American Bank Center during the Garden Bros. Circus on Sept. 13.

Since Barnum & Bailey announced in January it was no longer using animals in its shows, PETA has been campaigning for other shows to do the same. Faith Robinson, a representative from PETA, reached out to Del Mar College student Julieta Hernandez asking her to organize a protest.

“Circus animals are not happy,” Hernandez shouted from protest lines. Hernandez organized the protest in hopes that she can help “inform people and try to be as educational as possible” about the use of animals in the circus.

Another protester, Izzy Erratas, felt circus-goers have a lack of understanding of what circus animals endure.

“Not enough people realize what is happening. It’s not right to be abusing animals and exploiting them,” Erratas said.

Those who were coming for the show didn’t seem deterred.

“Where else are we supposed to see animals? They aren’t putting them in zoos anymore” said circus-goer Cathy Gutierrez.

Patricia Rodriguez brought her young daughter to see the show.

“Everyone has seen a circus, it’s something to experience,” Rodriguez said.

This law would require local government officials to aid the work of federal immigration services, such as Border Patrol and ICE, by giving officials the right to ask anybody for their documentation based on suspicion rather than evidence.

Del Mar College is not exempt from this potential law, either — with our campus being a Hispanic Serving Institution, there are many students who are aware and careful around the possible addition of this law.

“I’m a visa student — but I’m here legally,” said DMC student José Miguel. He said that if he wasn’t, he’d be going the speed limit to avoid the possible confrontation.

History professor Dawson Barrett describes the law as an overreach of federal government into local authority.

Local democratic control is challenged with the proposed Senate bill.

“It doesn’t seem fair since getting people to become legal is already made really hard,” said DMC student Becca Hammond.

Other students such as Cody Benavides, a member of the Corpus Christi Solidarity Network, fear this law will lead to “unfair racial profiling and discrimination,” which is not a far cry considering the nation’s lingering issues concerning immigration policies.

Although Gov. Greg Abbott signed SB4 on May 7, the law is still partially blocked as cities dispute whether the law is constitutional. As of Aug. 30, local officials can continue to make their own decisions as to whether they want to assist the federal immigration services, and they will not face fines for declining requests.

Though many sanctuary cities have opposed the bill, the city of Corpus Christi has not had an official statement — although, the city has gotten pressure from protest groups, such as the Corpus Christi Immigration Coalition, which firmly calls the bill an “anti-immigrant” policy.

Raul Alonzo Jr., a member of the CC Immigration Coalition and the Solidarity Network, recommends figuring out what you need to do to prepare and protest if necessary, and learning how to put pressure on elected officials.

“The Corpus Christi Immigration Coalition is definitely against this law,” he said.

It’s too early to know what the outcome will be.

“No good, easy answer can be given,” DMC student James Kuhlemeier said about the law. “Whatever decision people will make, no one will be happy.”

Streaming services such as Amazon Prime, Spotify and Hulu have become popular among many people. But what many don’t know is most of these services offer student discounts.

Music app Spotify recently began offering students the chance to purchase its services for only $4.99 a month for its Premium plan, and you can add Hulu as a free bonus. The service usually runs at $9.99 a month for Spotify Premium and $7.99 a month for Hulu with limited commercials.

Aside from student entertainment, deals are also available on some educational resources. As students at Del Mar we are allowed access to all of the Microsoft Office bundles, which is a better deal than paying for the services that can cost you more than $80 for an annual subscription.

Jesus Flores, a sophomore, never knew that Office 365 was available to him for free. Flores said had he known, it would have saved him many hours in the library finishing up homework. He was thrilled to find out about Spotify and Hulu coming together for a great deal.

“I already use Spotify for free right now. But now I know I can buy it for only $5 a month and watch my shows for free on Hulu, I will definitely pay for it,” Flores said.

These services are there for students and not knowing about them puts them at a disadvantage at times. Instead of spending money that can be put toward textbooks or other items needed for school, students are spending money on one service they have already paid for while being a student.

“I have tried Amazon Prime free for the 30-day trial but I didn’t know they had an Amazon Prime for students,” said Freshman TJ Savigan, who added that he also planned to look into Office 365. To use Office 365 all you need is your student email and password, and to visit login.microsoftonline.com

Apple users can purchase Apple Music for $4.99 a month as well compared to the price of $9.99 a month.

Adobe Creative Cloud is another service that is discounted for students, for only $19.99 a month.

Alamo Drafthouse offers a discount to students when bringing their student IDs. At 6 p.m., ticket prices will only be $6 compared with normal $9.

The 2017 Curricular Enrichment Film Series was scheduled to resume on Sept. 1, but because of problems with the air conditioning and the elevators, the film series resumed with the movie “Tower” on Sept. 22.

Merry Bortz, head of Library Technical Services, said the series can be a rewarding experience.

“It is a wide range of movies to provide the students with a cultural experience,” Bortz said.

The faculty selects the films. The film shown around Halloween is usually chosen for the purpose of entertainment value.

The 2017 film series includes such films as “The Thing,” a movie about a haunting alien and destructive force, and “Macbeth,” about the future king of Scotland.

Small snacks and covered drinks are allowed at the showings. The free film series is open to the public at 2 p.m. every Friday in the White Library in Room 530.