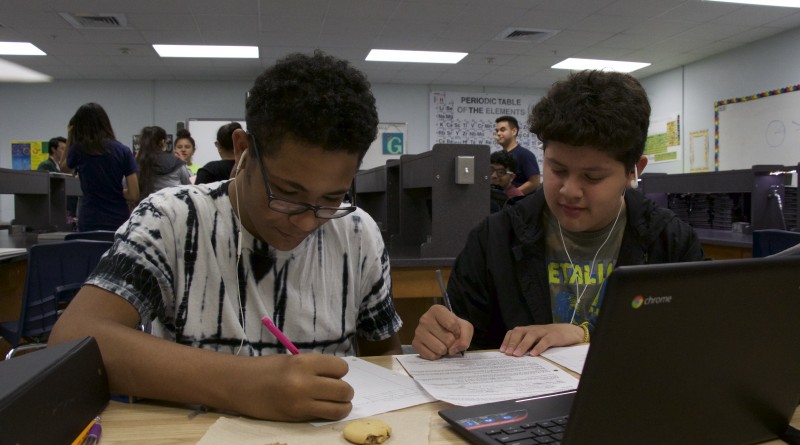 Del Mar College’s institution for high school students, known as Collegiate, begins working to prepare students for college from the moment they begin their education there. That hard work has paid off with a 100 percent college acceptance rate.

Almost as soon as CCISD schools finally reopened their doors to the returning students after Hurricane Harvey, on Sept. 5, the majority of the teachers, administrators and faculty members at Collegiate High School immediately began to emphasize to the seniors the necessity of preparing for college.

Ultimately, it seems that not even the wrath incurred upon the city of Corpus Christi and its neighboring communities by Harvey could stunt the high hopes for college that both the students and faculty had.

Vidal Anzaldua, the sole guidance counselor at the high school, stated that the storm “has set us back, but we are making progress.”

The seniors in the past month entered into internships and work programs, listened to guest speakers who represent nearby universities such as Texas A&M University-Kingsville and Texas A&M University-College Station, and even began to prepare their own resumés. Seniors now are working on requesting letters of recommendation from teachers, church leaders and friends of parents, among others.

Tracie Rodriguez, the school’s principal, also commented on the process, saying that part of the emphasis on college readiness for her students includes “building a greater awareness on financial literacy,” which she believes to “be a topic that (needs) to be talked about.”

While Collegiate’s seniors have a 100 percent acceptance rate into college, Rodriguez said this does not necessarily guarantee acceptance into an out-of-state university or college.

“Some (of these types of schools) are large universities, some are private universities,” Rodriguez said, adding, however, that it is not typical of Collegiate’s graduates to get accepted into institutions outside of Texas. This is related in part to the difficulty of getting all of the students’ credits to transfer over to this institution.

As the school year overall progresses at a steady pace, the Class of 2017 will continue to work on getting into a good college after they graduate.

“Here at Collegiate,” Anzaldua said, “(we are pushing the students) because I don’t want them to be like the typical seniors who wait until the last minute to do something. We graduate kids with an associate (degree) — I don’t push for kids to go out of state, but I would say … about 70 percent of seniors are accepted into universities outside of Corpus Christi.”

Haley Estudillo, a senior, keeps an agenda to regulate her time.

“It’s a lot of work, too,” said Estudillo, who plans to soon visit colleges. “But, it’s been stressful and exciting at the same time.”