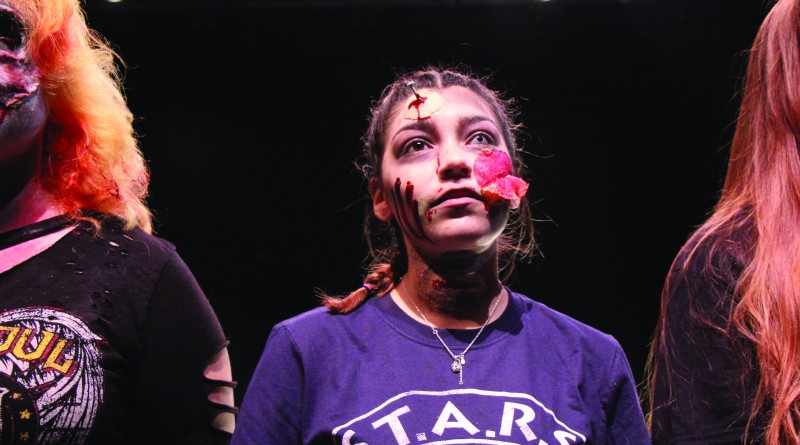 Peeling skin and stab wounds bled onto stage of the Bartlett Theatre during this semester’s gore makeup tutorial.

“I look forward to this every year” Assistant Professor of Psychology Beatriz Alvarado said as she waited for Garza to apply a prosthetic to her face.

Using Alvarado as her model, Garza began explaining the process of applying prosthetics and how to find inspiration.

“You have to look at real injury,” Garza said. “It’s the only way to make the wound look realistic.”

Cosmetology students watched as Garza demonstrated how to apply prosthetics, blend makeup to make a person appear bruised, and use brushes to create a realistic blood spatter texture.

During the tutorial the Drama 1341 class created their own looks behind the scenes.

“The thing that most people don’t realize is that gore makeup takes a long time,” Assistant Professor of Drama Shara Haghjoo said. “Sometimes these makeup calls are anywhere between four to five hours.”

The drama students were given only one hour to create their looks.

Afterward, the students presented their looks on stage for Garza to critique.

“It’s not just about making someone look pretty,” Haghjoo told the cosmetology students. “It’s about understanding the story.”