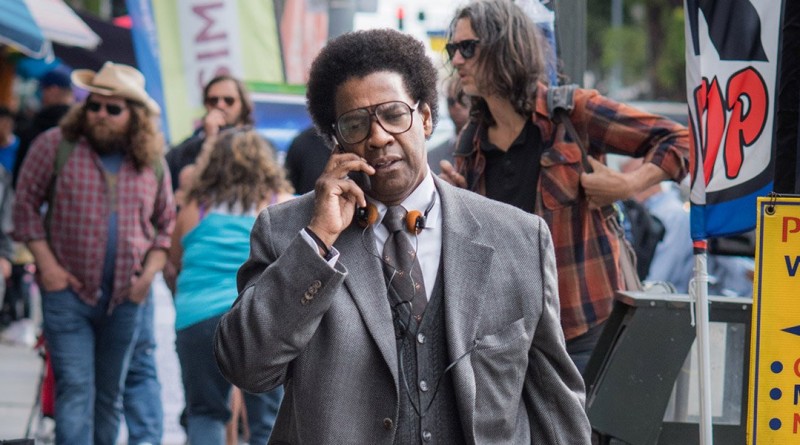 In Dan Gilroy’s “Roman J. Israel Esq.,” Denzel Washington plays a hard-working civil rights activist lawyer who is stuck in the past fighting the immortal demons of injustice.

The man running that firm is George Pierce, played by Colin Farrel. He serves as Roman’s straight arrow, if you will. In the film Roman’s values are truly tested as he fights the present justice system.

He struggles to find which reality he’s really in — one back in 1979 or the present day. He has realized times have changed and the world he once knew is gone. Gender roles and the U.S. justice system are massively different. The days when he used to look up to his activist heroes like Ali or Bayard Rustin are long over. Roman even articulates in a scene that purity is not for this world. His world has changed so much.

As Denzel told the Washington Times recently, “If the streets raise you, then the judge becomes your mother and prison becomes your home.” Roman fought tirelessly to keep young black men out of this situation.

A big plot point of the film where Roman is at a crossroads involves a $100,000 reward and the consequences follow in force.

Although Gilroy tries to do too much in this film with multiple plots all at once and portraying Roman as a liberal hero, the story at times is weak and drags.

The only noticeable character in the film is Roman J. Israel. Everyone else just falls to the back.

I did like how Gilroy works the setting into this film, especially when you’re in Roman’s apartment. He has pictures of all of his liberal heroes on the walls. As a viewer you can tell where Roman came from. There is a good twist at the end of the film. All in all, Denzel plays the dejected and nostalgic Roman J. Israel Esq. as only he can, with vast theatrical gravity.