It’s common knowledge that most college students drink alcohol.  Whether it’s to blow off steam, socialize with friends or just have a good time, alcohol is usually involved. Whatever the case may be, drinking too much alcohol on one occasion or over periods of time can have severe consequences.

Most students are aware that too much alcohol can lead not only to a hangover, but possible accidents that could result in injury or even compromise your health in the long run, but that doesn’t stop most from having a drink or two.

The National Institute on Alcohol Abuse and Alcoholism, or NIAAA, defines binge drinking as “a pattern of drinking that brings a person’s blood alcohol concentration to 0.08 grams percent or above. This typically happens when men consume 5 or more drinks, and women consume 4 or more drinks, in about 2 hours.” According to the Substance Abuse and Mental Health Services Administration, binge drinking is defined as, “Drinking 5 or more alcoholic drinks on the same occasion or at least one day in the past 30 days.”

The Centers for Disease Control and Prevention also adds that, “about 90 percent of the alcohol consumed by youth under 21 in the United States is in the form of binge drinks and although college students commonly binge drink, 70 percent of binge drinking episodes involve adults age 26 years and older.”

Curious about college students and binge drinking, I joined some students at a couple of local bars to survey what I found while they drank. I observed and took note of their physical appearance, volume in voice and behavior as the night progressed and the drinks consumed

Rusty Piaczynski, a bartender at Vernon’s, had a different opinion form the NIAAA’s definition of what binge drinking is.

“Binge drinking is when you constantly go out and get hammered so many days in a row and you just can’t stop drinking,”  Piaczynski said.

A patron at Vernon’s, Blake Stevens, had a similar take on binge drinking as well.

“Binge drinking is drinking ‘till you blackout. In college, you don’t know what you’re doing. You’re just trying it for the first time and once you get old enough, it’s painful. You learn not to drink so much. I think you learn if you don’t learn, then you’re stubborn.”

When talking with fellow students about their own reason to consume alcohol it wasn’t about going out with the intention to get drunk. It’s simply a way to go out and socialize with friends. 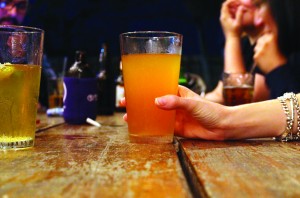 As the night progressed and drinks consumed increased, I started noticing differences in behavior. There was more laughing and they were getting more comfortable talking not only to each other, but to people they had never met; sharing stories of future life ambitions. Drinking games were birthed and emails sent to ex-lovers ensued.

By about the fourth hour into it and beyond the fifth drink, it was now storytelling and performance hour, complete with lip-syncing, air guitar and air drumming.

The night was fun and entertaining to say the least, and my findings were exactly what I suspected. Alcohol consumption seems to either relax people or get them very excited. Keep in mind that whether aiming to binge drink or not, some minor or serious consequence can result from drinking too much.

The NIAAA said that, “599,000 students between the age of 18 and 24 receive unintentional injuries while under the influence of alcohol…about 25 percent of college students report academic consequences of their drinking including missing class, falling behind, doing poorly on exams or papers, and receiving lower grades overall.”

In addition to injury or performing poorly in school, there are other severe consequences.

“More than 97,000 students between the ages of 18 and 24 are victims of alcohol-related sexual assault or date rape…more than 150,000 students develop an alcohol-related health problem and between 1.2 and 1.5 percent of students indicate that they tried to commit suicide within the past year due to drinking or drug use,” according to the NIAAA.

Also, with drunken-driving related cases, the consequences can be fatal.

According to Mothers Against Drunk Driving, in 2012, the number of fatalities related to drunken driving totaled 10,322 nationally. Thirty-eight percent of those fatalities were in Texas alone.

Concluding the night, I provided a fellow student with a ride home to be safe. If you are going to drink, make sure to drink responsibly and always have a designated driver or have the bar call a friend or a cab for you.